Lebanon’s Maronites celebrated the 1600th anniversary of St. Maroun’s death on Tuesday in two separate masses held in Beirut’s Saint George church and in Brad in the Syrian city of Aleppo.

Aoun slammed those criticizing his visit to Syria, stressing the occasion was celebrated worldwide rather than only in one church.

Franjieh said he was proud of being part of the Syrian-Iranian axis.

Ad-Diyar daily said Bkirki circles have expressed frustration at attempts to show a divide among Christians.

“What’s happening in Brad is an attempt to target the Maronite Patriarchate and hint that there is a Christian authority that can make decisions to weaken the Maronite church,” the newspaper said. 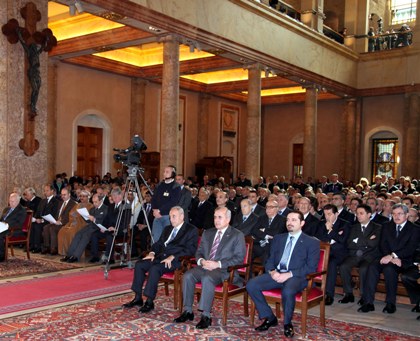