Lahoud urges his supports to participate in Feb. 14 rally 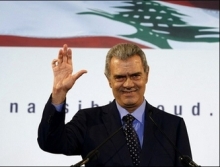 Nassib Lahoud’s Democratic Renewal movement urged its supporters to take part in the rally on Feb. 14 ” to express their loyalty to the martyrs of the Cedar Revolution and to ensure their commitment to the same goals and beliefs.”

The Democratic Renewal movement skipped the March 14 alliance Sunday meeting at Bristol ” in line with its position of boycotting their meetings since more than six months, as a “result of the blunders committed by some parties of the March 14 alliance” , according to statement issued last week by the party .