The Hamster That Ate The World 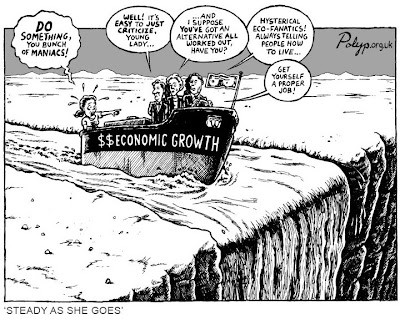 It is ironic that many in the developed world are rather pleased that the global economy in general and the developed countries in particular have experienced economic contraction over the past year.  The idea is based on the simple premise that no finite system can grow without limits. This idea was expressed rather forcefully by the economist Kenneth Boulding when he said: “Only mad men and economists believe in infinite growth in a finite world”.

Those ideas that question the popular economic mainstream mantra of consistent and exponential economic growth were given a lift by the studies of the Club of Rome that wrote the famous study “Limits to Growth” which showed that the world cannot avoid a severe crash if it is to maintain its current trajectory of economic policies all over the world. The dire outlook of these studies has been confirmed whenever the models were updated with new data and more sophisticated techniques.

Herman Daly an ex Senior Vice President at the World Bank and currently a Professor of economics at the University of Maryland became closely associated with this idea when he published his very popular and influential book “Steady State Economics”. The notion that an economy cannot grow forever was not invented by Mr. Daly. He gives all the credit for the idea to JS Mill a major figure of classical economics during the nineteenth century.

Steady State Economics (SSE) is currently on a roll of sorts. It is gaining adherents and influence all over the world but has gained most in the developed economies. The blue ribbon committee appointed by the French President, Sarkozy, to study the reasons behind the global economic meltdown recommended that it is high time that the world reexamines its love affair with what it called “GDP fetishism”. France intends to use its presidency of the group of 20 this year in order to legitimize and popularize the concept of SSE.

It is important to note though, that the calls for SSE rest on two pillars (1) a constant level of human population and (2) a constant level of physical output. There is no controversy that any system, and especially the global ecosystem, should have a limit to its carrying capacity. Proponents of the Club of Rome and Steady State Economics are telling us that the world is already past its carrying capacity and that it will be ill advised not to change course.

The New Economics Foundation of the United Kingdom is one of the better known groups that are sparing no effort to promote the need to stop economic growth. NEF is working towards “an economics as if the planet matters” has produced the following short video clip to promote SSE. Take a look.