U.S. helicopters carrying food hovered above the ground in one area of the battered Haitian capital on Saturday, flinging out boxes to the anxious crowd.

It was a chaotic scene as hundreds of Haitians without food and water for four days swarmed toward the boxes, ignoring the wind and dust kicked up from the helicopters’ blades.

In Petionville, a suburb of Port-au-Prince, U.S. troops handed out about 2,500 meals Saturday, before they ran out. Seventy soldiers arrived with the U.S. Army’s 82nd Airborne Division in Petionville to set up a distribution base and a landing zone for helicopters. They began handing out meals about 2 p.m. CNN 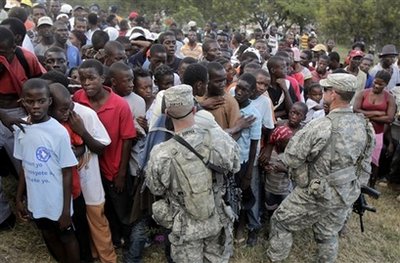