The Iranian regime hit back viciously last night after the opposition turned the funeral of their spiritual leader, Grand Ayatollah Hossein Ali Montazeri, into another huge anti-government demonstration in the holy city of Qom.

Men on motorbikes attacked the car carrying Mir Hossein Mousavi, the opposition leader, back from Qom to Tehran. They smashed the back window and injured one of his aides, a reformist website reported. Hundreds of government agents halted the memorial service for Montazeri, according to a conservative website. Times 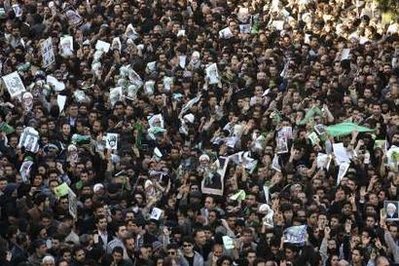 The Iranian opposition turned the funeral ceremony of Grand Ayatollah Hossein Ali Montazeri in the holy city of Qom, 120 km (75 miles) south of Tehran, December 21, 2009 into another anti-government rally