Hariri made a surprise visit to Jumblatt in Mukhtara

Lebanon’s PM Saad Hariri headed to Mukhtara, Shouf in a surprise visit to progressive Socialist party leader MP Walid Jumblatt after taking part in the 10-kilometer race that was held on the streets of downtown Beirut.

The fathers of Hariri and Jumblatt were assassinated and in both cases Syria was blamed.

During the tribute Jumblatt told supporters that even though the PSP took a “centrist” position ” he has high respect for the March 14 majority alliances and principles “we have fought hard to uphold at Martyrs Square.”

Jumblatt stressed the need to discuss Hezbollah arms at the dialogue table. “There is need for resistance weapons to defend Lebanon until conditions ripe to absorb these weapons into the (Lebanese) army,” Jumblatt said 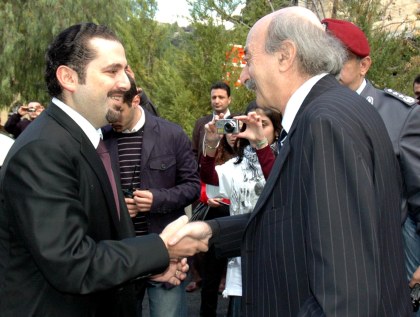