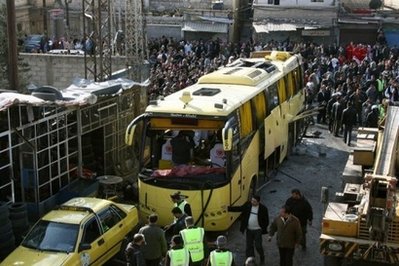 A blast at a gas station in Sayyida Zainab, a Damascus suburb killed three people Thursday, gutting the back of an empty bus and blowing out nearby windows, officials said.

Syria’s interior minister, Said Mohammad Sammour, ruled out a terrorist attack and said on state-run Syrian TV that the Iranian bus driver and two Syrian gas station workers were killed when a tire they were pumping air into exploded. But witnesses reported seeing flames…The back of the bus, where the engine is located, was gutted and charred along with the rear seats. The worst damage appeared to be to the outside of the bus. The Syrian Police sealed off the area and reporters were banned from reaching the site.