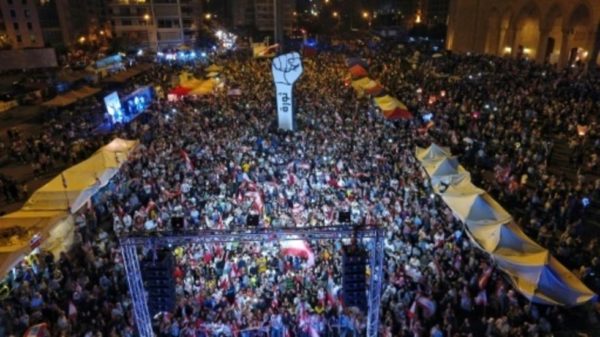 Thousands protested on Sunday across Lebanon against the ruling class for a fourth consecutive week, as they await a new cabinet two weeks after demonstrations forced the premier to resign.

The country has since October 17 been swept by an unprecedented cross-sectarian protest movement against the entire political establishment, which is widely seen as irretrievably corrupt and unable to deal with a deepening economic crisis.

The protests triggered Prime Minister Saad Hariri to tender the resignation of his government on October 29, but he remains in a caretaker capacity and manoeuvrings are still ongoing to form a new cabinet.

Dubbed “Sunday of Determination”, the day was marked by huge rallies in several cities from the afternoon onwards.

From the capital Beirut to Sidon and Tyre in the south up to Tripoli in the north, the ranks of protesters on the streets swelled from the early evening.

Brandishing Lebanese national flags, the protesters demanded that the formation of a new government be accelerated.

They once again insisted any incoming cabinet be comprised of technocrats and be independent of established political parties.

“We will not leave the streets before our demands are totally satisfied!” shouted one young protester into the microphone of a local broadcaster.

“We are more determined than ever,” she insisted.

Since Hariri resigned, political bargaining has stumbled over the shape of a new government.

Hassan Nasrallah, the head of the powerful Shiite movement Hezbollah, is on Monday due to deliver a televised speech.

He has in recent weeks dismissed the ongoing demand from the streets that the next government be formed of technocrats.

Meanwhile, fears of a banking crisis have risen among residents.

Banks were closed during the first two weeks of the protests, and while now reopened, they have put significant restrictions on withdrawals and conversions of Lebanese pounds into dollars.

On Saturday, Lebanon’s President Michel Aoun met the caretaker finance and economy ministers, along with the central bank governor and the head of the country’s banking association.

A statement released after that meeting called on citizens not to give in to panic, stressing that bank deposits remain secure.

The World Bank on Wednesday urged authorities to swiftly form a new government to prevent further deterioration of the economy.