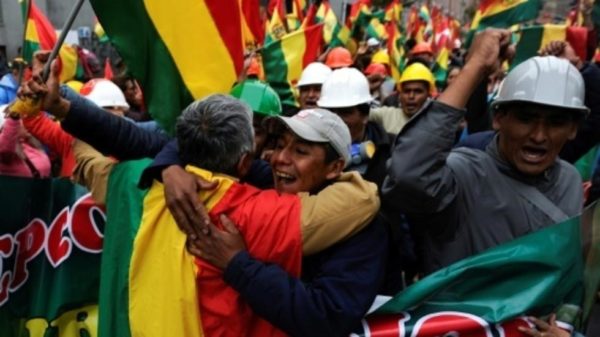 “THIS is my only flag,” shouted a young masked man in a white helmet, waving the Bolivia’s red, yellow and green emblem. Nearby, a group of people worked to lower the “whipala”, a checkered flag that represents indigenous cultures.

For Morales, the country’s first democratically elected indigenous leader, it also became a symbol of his long and controversial time at the top — nearly 14 years.

“This idiot who does not know how to think, has slipped out the window. Great, we are happy,” 61-year-old merchant Reggina Sojas, in El Prado, the main avenue of La Paz, told AFP.

Police took down the “whipala” from major public buildings, including the Legislative Palace, the Electoral Tribunal and the General Police Command.

Shortly before, the right-wing civic leader who commanded the popular rebellion over a disputed election in October that gave Morales a fourth term, Luis Fernando Camacho, kept his promise to enter the old government palace with a symbolic letter of resignation for Morales in one hand and a Bible in the other.

“This is totally glorious for us. We are so, so very happy, and long live democracy,” banker Ricardo Revilla, 37, told AFP.

Nearby on a corner of Murillo Square, riot police who a few days ago were repressing student demonstrators cheering alongside the same people.

Across the country, in lowland Santa Cruz, 900 kilometers (560 miles) east of La Paz, a woman waved the three-color flag while thanking “God for ridding us of the ‘dictator,” as his adversaries began calling Morales.

“We are glad that democracy is returning after so much tyranny,” said one young man who declined to give his name.

Police officers from the region prayed on their knees in front of the door of the Cathedral.

Elated cheers of “Viva Bolivia” replaced the chants that echoed next to barricades near the government house.

In the city of Sucre, a group of people gathered in the Plaza de Armas, where the republic was founded in 1825, singing the national anthem.

“We’d die rather live as slaves,” says one stanza.

Morales’ fate was sealed after the armed forces and police on Sunday urged him to resign. On Friday, police officers rebelled and started siding with the opposition in the streets.

“The coup (d’etat) has been carried out,” said vice president, Alvaro Garcia Linera, who accompanied Morales in his message to the nation in which he announced his resignation. Garcia Linares did, too.

If he had not been assigned the win in the October election, Morales would have been due to leave power on January 22, at the end of his current five-year term.