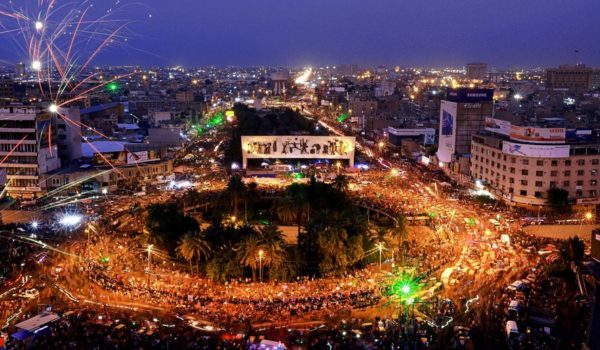 For more than forty years Iran has billed itself as a revolutionary, radical force, vowing to upend the staid and corrupt order of the Middle East. Its pillars—including Supreme Leader Ali Khamenei—adopted not only the rhetoric of political Islam, but also the slogans of the leftist liberation movements that were fervent in the 1970s, railing against conservative fatcats.

But over the last fifteen years so, as Iran became a significant geopolitical force in the Middle East, the gap between its revolutionary posture and its actions have widened.

Its hypocrisy first came into glaring view during the 2011 Arab Spring, when it cheered on uprisings against ruling regimes in Egypt, Bahrain and Libya, only to crush a renewal of protests in Iran under the banner of the 2009 post-election protests known as the Green Movement. And when young men and women took to the streets of its ally Syria, Tehran dispatched death squads to aid Bashar al-Assad and his Russian patron in a years-long campaign of mass murder directed at regime opponents.

This year, as popular protests against entrenched corrupt, ruling regimes engulfed Algeria, Sudan and even Egypt, Iran stayed mum—perhaps sensing that it had more to lose from any change in the regional status quo than to gain.

And when protests against endemic corruption, sectarian patronage systems and government incompetence broke out in major Shia cities and neighborhoods in Iraq and Lebanon since October, the Iranian regime stood not with the protesters but with their tormentors.

“People have some demands which are justified, but they should be aware that their demands can be fulfilled within the framework of the legal structures,” the Supreme Leader was quoted as saying on October 30.

Iranian official statements about the protests could have been taken right from the playbook of deposed Egyptian ruler Hosni Mubarak and Tunisian strongman Zein el-Abidine Ben Ali, who both blamed “foreign hands” for stirring up the protests against their rule.

“More than anyone else in the world it is America and Western intelligence services, with the sponsorship of regional reactionary countries, that are causing the riots,” said Khamenei, effectively giving Iraqi militiamen and Shia thugs in Lebanon the green light to employ violence against protesters. “This is the worst enmity and the most dangerous hostility against a nation.”

Mahmoud Vaezi, head of President Hassan Rouhani’s office, accused Iran’s enemies of funding and encouraging the protests. He warned of “anarchy and disorder” that would hurt the people of Iraq and Lebanon, which are part of the “axis of resistance” to US hegemony that Tehran considers its strategic depth.

“Both America and Saudi Arabia along with certain countries and the Zionist regime are riding the demands of the public [in Iraq and Lebanon],” he said on state television on October 30.

It is worth remembering that Khamenei this year marked thirty years as Supreme Leader of Iran, a term of office that exceeds almost any of the Arab rulers now in power. The scowls of Iran’s graying, elderly elite as they warn of “disorder” and “foreign interference” mirror those of Arab dictators and north African tyrants when they face unrest.

The price of Iran’s hegemony is that it sounds more and more like those same sclerotic rulers it once railed against, unable to adapt to new realities, suspicious of any new development that threatens the status quo it dominates.

Iran’s reaction to the death of the leader of the Islamic State of Iraq and al-Sham Abu Bakr al-Baghdadi, now confirmed by ISIS itself, showed it for the inflexible, rigid state it has become. Instead of celebrating even for a moment the killing of a man who led an organization behind the June 7, 2017 terrorist attacks in Tehran which left a dozen people dead, Iranian officials were suspicious and angry, a tone which seems to be their default mode.

“All these years, Americans have created an anti-[ISIS] coalition but they did not do the least against terrorism,” IRGC commander Esmail Kosari said. “By using media ballyhoo, they want to present themselves as anti-terrorists. They created the Taliban, al-Qaeda, and individuals such as Osama bin Laden. They supported and armed these groups in full force and they continue doing so.”

The protests in Iraq and Lebanon are about myriad dysfunctions, including corruption and poor public services, as well as foreign interference by countries such as Saudi Arabia and the United States and Iran, which has been called out by protesters as exercising a malign influence on their Shia-dominated countries.

At their core, the problems in Iraq and Lebanon are the same as those in Iran, as they are in Egypt, Syria, Algeria and elsewhere in the Middle East: castes of entrenched, corrupt and incompetent rulers lord over young populations yearning for better lives. The “revolutionary” slogans of Iran’s “resistance” are empty rhetoric that merely back whatever policies benefit the corrupt ruling elite in Tehran.

Borzou Daragahi is an international correspondent for The Independent. He has covered the Middle East and North Africa since 2002. He is also a Nonresident Fellow with the Atlantic Council’s Middle East Security Initiative. Follow him on Twitter: @borzou.