The “Coordination committee of the  Lebanese Revolution” issued a statement on Tuesday evening urging all protesters to open” the roads starting Wednesday early morning after  the revolution succeeded in within 13 days of protest  in achieving its first demand  which is the resignation of the government despite the campaign of intimidation.   ”

The resignation of the government   opens the door to achieving other demands starting with  the formation of a national salvation government able to take the country out of its crisis and meet the demands made for the revolution, and to conduct  early parliamentary elections “,  The statement added .
It called on the  protesters   open the roads as a gesture of goodwill to allow the public to secure vital and essential  needs
It also called on”the Lebanese to continue the protests   until all the  demands are met”.

Here is the Statement in Arabic 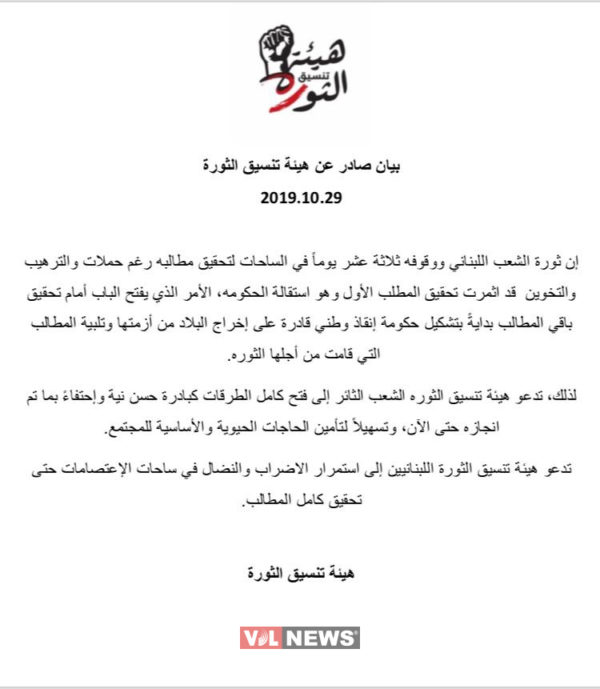 This development comes after Lebanon’s Prime Minister Saad Hariri announced he was resigning on Tuesday, succumbing to the demands of protesters who have staged nationwide demonstrations for nearly two weeks.

Protesters are calling for a new non-sectarian system, with “All Means All” a key slogan of the movement.

Chaos in downtown Beirut
Hariri’s announcement came hours after chaos broke out in downtown Beirut when a mob stormed into the capital’s main protest site, setting parts of it alight and tearing up tents on Tuesday afternoon.

Shouting “Shia, Shia” and singing chants in support of Hezbollah and Amal ( another Iranian backed Lebanese political party which is aligned with Hezbollah ) hundreds of men wielding sticks poured into the site, breaking up protest road closures and attacking demonstrators. Police fired dozens of rounds of tear gas to disperse the crowds.

Decades of government mismanagement and widespread corruption have crippled Lebanon’s finances, adding pressure to the currency and causing the debt to swell. The country has one of the world’s highest debt to GDP ratios and around a third of the its population lives under the poverty line, according to the World Bank.
Hariri’s resignation could deepen the latest unrest and exacerbate the economic crisis. But protesters say it also presents an opportunity to shake off the country’s sectarian system and transition into civil governance.
Hezbollah has opposed the government’s resignation, with Nasrallah warning that it could lead the country “into the abyss.”
Share: