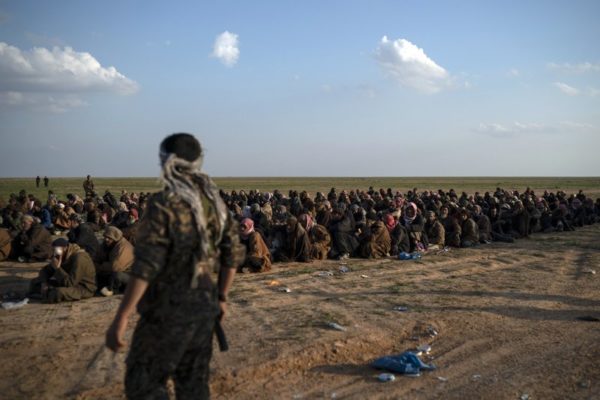 FILE – In this Feb. 22, 2019 file photo, U.S.-backed Syrian Democratic Forces (SDF) fighters stand guard next to men waiting to be screened after being evacuated out of the last territory held by Islamic State group militants, near Baghouz, eastern Syria. The IS erupted from the chaos of Syria and Iraq’s conflicts and swiftly did what no Islamic militant group had done before, conquering a giant stretch of territory and declaring itself a “caliphate.” U.S. officials said late Saturday, Oct. 26, 2019 that their shadowy leader Abu Bakr al-Baghdadi was the target of an American raid in Syria and may have died in an explosion. (AP Photo/Felipe Dana, File)
Share:

French President Emmanuel Macron has gone on Twitter to warn that the death of Islamic State group founder and leader Abu Bakr al-Baghdadi is a knock for the extremist organization, but not its end.

Macron said Sunday the U.S. raid that killed the leader who sought to establish a new Islamic “caliphate” across Syria and Iraq was a “blow against Daesh,” using the Arabic  term for the group.

But he said “it’s only a step” and “the fight continues with our partners in the international coalition so that the terrorist organization is definitely defeated.”

Al-Baghdadi, the shadowy leader of IS who presided over its global jihad and became arguably the world’s most wanted man, was killed in a raid in Syria, President Donald Trump said Sunday.

Iraqis in Mosul have welcomed the demise of  al-Baghdadi, whose fighters seized the city in 2014 and destroyed large parts of it as they were driven out by U.S.-backed Iraqi forces.

Saad Khalil, a shop owner in the heavily damaged Old City, says he hopes God will “take revenge on him and his followers for what they did to us.”

IS militants seized Mosul, Iraq’s second largest city, during their lightning campaign across northern and western Iraq, and imposed their harsh interpretation of Islamic law on its residents. In 2017, the extremists fought street by street against U.S.-backed Iraqi forces in battles that dragged on for months and destroyed entire neighborhoods, including the Old City.

Mudhir Abdul Qadir, another Old City resident, said al-Baghdadi’s death is a “fraction of the sins” committed in the Old City, where there are still bodies beneath the rubble more than two years after Iraq declared victory there in July 2017.

Reacting on Saturday to U.S. president Donald Trump’s announcement that al-Baghdadi was dead, Information and Communications Technology Minister Mohammad Javad Azari Jahromi said on his Twitter account: “Not a big deal! You just killed your creature.”

He did not elaborate but Iran has often accused the U.S. of creating the Islamic State group, without providing any evidence.

The commander of the Syrian Kurdish-led forces says five months of joint intelligence cooperation with the U.S.-led coalition led to the killing of the leader of the Islamic State group.

Mazloum Abdi said in a tweet Sunday that the reported killing of Abu Bakr al-Baghdadi took place in a joint operation following “cooperation on the ground and accurate monitoring” for five months. He called it a “successful and historic” joint intelligence work with the U.S.

The U.S. raid with helicopters took place in the Barisha area north of Idlib city a few kilometers from the Turkish border.

The Kurdish-led forces cooperated with the U.S.-coalition for at least four years to fight IS in Syria until they declared military victory against the group in March.