‘Lebanon a bus without driver’, Geagea declares from Canada 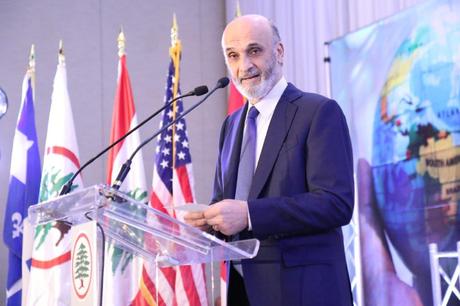 Lebanese Forces leader Samir Geagea  declared  during a  speech in Canada:  Lebanon as “a bus without a driver ” and driven by someone other tahn the one behind the steering wheel

“There are currently two imminent threats to Lebanon: the first is a security-military-strategic threat, seeing as Lebanon is currently like a bus without a driver, which is being driven by someone other than the one behind the steering wheel, and we don’t know where he’ll take us,” Geagea told the Lebanese Forces’  23rd North American convention in Canada.

“The decision of peace and war is fully in Hezbollah’s hand, and we hope Hezbollah will not drag us into a war in the region with all its dramatic repercussions,” Geagea added.

“As for the second threat, it is a very serious financial-economic one, seeing as the state is under a debt of more than $94 billion and growth has nearly touched zero percent over the past years while the state’s revenues are decreasing,” Geagea went on to say.

The LF leader  pointed to one of the many obstacles facing the country, namely “the presence of around 5,300 illegitimate employees in state administrations who were illegally hired…let alone the illegal crossings that have not been closed because they are a source of benefit to some, while others do not want a regulating body for the tele-communications sector…etc.” He added, “So with such a psychic, we will never overcome our crisis. This is why we were against the current budget because it does not take the country out of its crisis.”

Geagea also said that he had been “dreaming” of meeting with the LF’s cadres in North America for the past 15 years.

“We used to communicate via phone or video conference, and here we are meeting today face to face,” he said.