Hong Kong airport cancels all flights due to protests 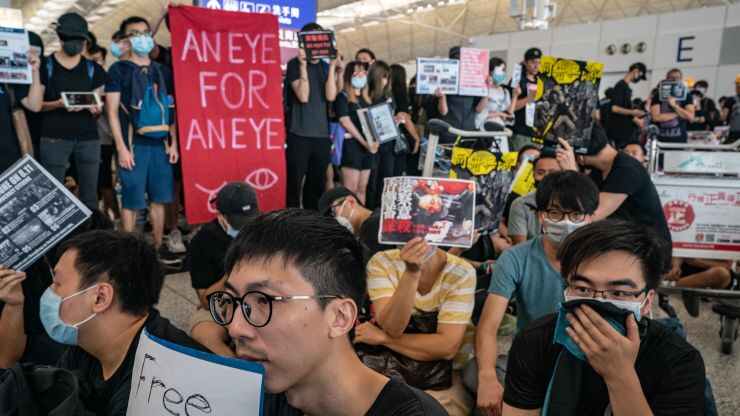 Protesters occupy the departure hall of the Hong Kong International Airport during a demonstration on August 12, 2019 in Hong Kong, China.
Share:

Hong Kong International Airport has cancelled all departures for the remainder of the day, citing serious disruption due to protests.

The airport authority said Monday it had cancelled all flights not yet checked in by the afternoon. Anti-government protesters had been peacefully demonstrating at the airport for a fourth day.

“Airport operations at Hong Kong International Airport have been seriously disrupted as a result of the public assembly at the airport today,” the authority said in a statement.

“The traffic to the airport is very congested, and the car park spaces at all car parks are already full. Members of the public are advised not to come to the airport,” it added. It later advised all passengers to leave the terminal building as soon as possible.

The increasingly violent protests since June have plunged the Asian financial hub into its most serious crisis in decades and are one of the biggest popular challenges to Chinese leader Xi Jinping since he came to power in 2012.

Despite the intense police response and a toughening stance from China, the movement that began two months ago in opposition to a bill allowing extradition to the mainland still seems to enjoy broad support in the city of more than 7 million people.

The unrest in Hong Kong — a former British colony that was returned to Chinese rule in 1997 — has frequently crippled its transportation system. The rallies have snowballed into a democracy movement, with some even demanding full autonomy from Beijing.

Hong Kong carrier Cathay Pacific advised customers to postpone non-essential travel and said they should not proceed to the airport. In a statement it added: “While disruption events like these can change significantly and at short notice, rest assured we are doing everything we can in advance to minimize the impact to customers.”

It added that the cancellation period for Hong Kong flights will last until Tuesday morning, according to Reuters.