Mass shootings in Texas and Ohio: Trump warned by NRA over background checks 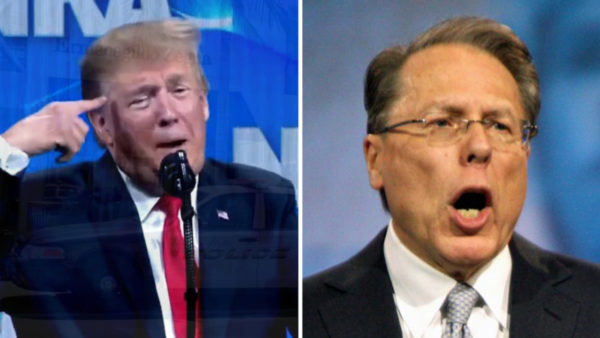 The National Rifle Association is in complete turmoil, but embattled chief Wayne LaPierre took time to call President Donald Trump personally after he told the press he was open to stricter background checks
Share:

President Donald Trump has repeatedly told lawmakers and aides in private conversations that he is open to endorsing extensive background checks in the wake of two mass shootings, prompting a warning from the National Rifle Association and concerns among White House aides, according to lawmakers and administration officials.

Trump, speaking to reporters Wednesday before visiting Dayton, Ohio, and El Paso, Texas, where weekend shootings left 31 dead, said there “was great appetite for background checks” amid an outcry over government inaction in the face of repeated mass shootings.

Trump’s previous declarations of support for tougher gun controls, including after the deadly Parkland, Florida, shooting in February 2018, have foundered without a sustained push from the president and support from the NRA or Republican lawmakers. Even Trump’s advisers question how far he will go on any effort.

NRA chief executive Wayne LaPierre spoke with Trump on Tuesday after the president expressed support for a background check bill and told him it would not be popular among Trump’s supporters, according to officials who spoke on the condition of anonymity to freely discuss internal talks. LaPierre also argued against the bill’s merits, the officials said.

The NRA, which opposes the legislation sponsored by Sens. Patrick Toomey, R-Pa., and Joe Manchin III, D-W.Va., declined to comment.

Advisers to Senate Majority Leader Mitch McConnell, R-Ky., said he would not bring any gun-control legislation to the floor without widespread Republican support. Trump has waffled, current and past White House officials say, between wanting to do more and growing concerned that doing so could prompt a revolt from his political base. Even some supporters of the Manchin-Toomey bill, which would expand background checks to nearly all firearm sales, say it is unlikely to pass.

“I don’t think the president or his Republican allies are going to become out of nowhere advocates of aggressive gun control,” said Matt Schlapp, who leads the American Conservative Union and is a close ally to Trump.

Trump has focused on guns extensively since the shootings, calling lawmakers and surveying aides about what he should do – outreach that began Sunday evening. White House officials say there have been a series of meetings on a response, convened by acting chief of staff Mick Mulvaney, including a session Tuesday morning. The president has discussed with aides the idea of a Rose Garden bill-signing ceremony for gun-control legislation, a notion that seems premature to many in the West Wing.

Trump also asked lawyers about what he could enact through an executive order, officials said.

“He seems determined to do something and believes there is space to get something done this time around,” said Senate Judiciary Committee Chairman Lindsey Graham, R-S.C., who said he had spoken to Trump “four or five times” since the shooting. “The president has a pretty common-sense point of view. He’s never been a sports or gun enthusiast. But he is more determined than ever to do something on his watch.”

Manchin said Trump called him at 6:30 a.m. Monday and that the two spoke again on Tuesday, when Trump said he wanted legislation before September, when the Senate is scheduled to return.

Trump did not express explicit support for the Manchin-Toomey bill but asked a range of questions. Most of the recent mass shootings were carried out with guns purchased legally.

“He was inquisitive, wanting to know why it hadn’t happened. He wanted to know all about it,” Manchin said. “I told him we couldn’t get enough Republicans to help us.”

Manchin said he told Trump that he would need to back any gun-control legislation or it would fail again. Those comments were mirrored by almost a dozen GOP and White House aides.

“If you don’t stand up and say, ‘This is a piece of legislation I support,’ we’re not going to get enough cover to have Republicans stand tall. They won’t be able to do it,” Manchin said.

On Tuesday, Trump outlined some NRA concerns in a second call with Manchin. “We talked about that,” Manchin said. “I told him, we don’t expect the NRA to be supportive. Mr. President, in all honesty, when you did the bump stocks, they weren’t for you. They were against that, too. You didn’t take any hit on that.”

A White House official said Trump had asked some advisers and lawmakers this week about whether the NRA had enduring clout amid an internal leadership battle and allegations of improper spending, as well as what his supporters would think of the bill. The Washington Post reported this week that LaPierre sought to have the NRA buy him a $6 million mansion in a gated Dallas-area golf club after the shooting at Marjory Stoneman Douglas High School in Parkland, Florida, in which 17 students and staff members were killed.

Toomey said he has spoken with the president at least three times since the weekend shootings. He declined to elaborate on the conversations, although he stressed that Trump hasn’t specifically endorsed the bill. Their conversations have been more general, he said, but Toomey noted that they had been “encouraging” and “very recent.”

“I will just tell you generally the president is open-minded about this,” Toomey said.

Some measures – such as a ban on assault weapons – have been ruled out, White House officials and legislative aides say. Recent polls indicate a majority of Americans support some form of a ban on assault rifles, though there is a large partisan divide and fewer than half of Republicans support such measures. A July NPR-PBS NewsHour-Marist poll found 57 percent of the public supported a ban on “the sale of semiautomatic assault guns, such as the AK-47 or the AR-15.” Fewer than 3 in 10 Republicans supported the proposal, rising to a slight majority of independents and more than 8 in 10 Democrats.

“There’s no political space for that,” Graham said. “So I don’t think he’s going to go down that road.”

However, about 9 in 10 Americans support requiring background checks for all gun purchases, including more than 8 in 10 Republicans, Democrats and independents, according to polling.

Trump was vague about what he would do in his comments Wednesday, and current and former White House officials said he is often ambivalent on what he should do after shootings.

After the Parkland shooting, Trump expressed support for background checks for gun purchases and greater police power to seize guns from mentally disturbed people. But he faced significant resistance from the NRA and Republicans and abandoned the ideas.

On Air Force One after the October 2017 shooting in Las Vegas that left 58 dead, Trump said he wanted to enact a law to keep such shootings from happening again and would question others for ideas but did not have specific proposals.

After shootings, Trump regularly would poll aides about what measures would have political support, but if they did not gain backing, he was not inclined to lead the charge.

“He would not be blocking it, but he’s not going to be the one forcing it to happen,” this official said.

Some of the president’s more moderate friends and donors have pressed for more-robust gun-control measures. But Trump has also told advisers that he cannot lose any members of his “base.”

“Republicans are headed for extinction in the suburbs if they don’t distance themselves from the NRA. The GOP needs to put forth solutions to help eradicate the gun violence epidemic,” said Dan Eberhart, a Republican donor.

In public, Trump has promoted “red flag” laws – also known as extreme risk protection orders – that allow family members or law enforcement to petition a judge to ban gun access for someone they believe is an imminent threat to themselves or others. Seventeen states and the District of Columbia have such laws already in place, according to the Giffords Law Center to Prevent Gun Violence, which advocates more restrictions on firearms.

White House aides said such a bill was the most likely outcome and had the most support in the West Wing. Schlapp said that Trump could convince Republicans to support some measures seen as less restrictive.

“It’s the best route forward because it can pass, the president will sign it and it can actually stop the next attack,” Sen. Marco Rubio, R-Fla., who drafted legislation to encourage more states to pass their own red flag laws, said in a phone interview Wednesday. He began working on the legislation after the Parkland shooting.

“If you look at all the studies that have been done, you see that invariably, with perhaps the exception of Las Vegas, they all exhibited signs and warnings to people around them that they could do something,” Rubio said.

Yet any effort on Capitol Hill to implement firearms restrictions is likely to face, at a minimum, skepticism from conservatives concerned about any measure viewed as restricting gun rights.

Early on in his administration, Trump moved to loosen restrictions on gun purchases by people with mental illnesses, signing legislation overturning an Obama-era regulation that barred certain people with mental health issues from purchasing firearms.

Some Republican officials have pointedly noted that Graham didn’t consult other GOP senators before forging ahead with Sen. Richard Blumenthal, D-Conn., on a plan to advance red flag legislation through the Senate Judiciary Committee.

A handful of Republican members of the Judiciary Committee, through aides and in public comments, have indicated they are open to policies that would encourage states to implement such laws.

Sen. Ben Sasse, R-Neb., appeared the most skeptical, with a spokesman saying merely that Sasse has asked to review the legislative language from Graham. A spokesman for Sen. Ted Cruz, R-Texas, said the lawmaker “believes red flag laws are one of the tools states can consider, but that there are dangers depending on how a state implements these laws,” expressing concern about protecting “due process and our constitutional rights.”

Democrats, while generally supportive of red flag laws, questioned how much congressional efforts would actually help states – particularly conservative ones with Republican governors – enact them. Senate Minority Leader Charles Schumer, D-N.Y., said Wednesday that Democrats would demand a vote on legislation expanding background checks that had already passed the House and is opposed by the Trump administration in tandem with any Senate vote on red flag laws.

“The question is, what difference can the federal government make in what is largely a state decision?” said Sen. Chris Murphy, D-Conn., one of the most vocal advocates of gun control in Congress. “I’m all for federal action on extreme risk protection orders. I’m just not sure it’s going to move the needle.”