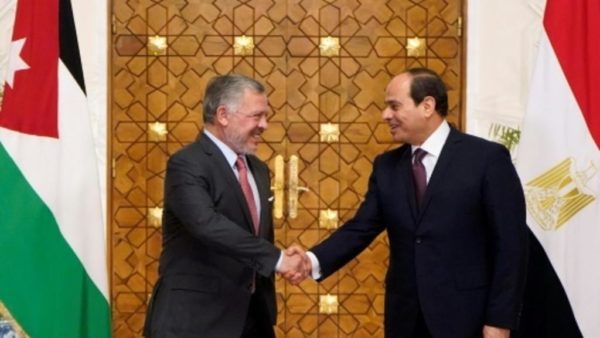 The meeting comes ahead of an expected visit to the region by US President Donald Trump’s son-in-law and senior White House advisor Jared Kushner, who is pushing a controversial peace plan rejected by the Palestinians and criticised by Jordan.

Kushner’s initiative, partially unveiled at a Bahrain conference in June, dangled the prospect of pumping $50 billion-worth of investment into the stagnant Palestinian economy.

But it failed to address key Palestinian demands such as the establishment of their own independent state.

The political side of the plan has yet to be released.

In a statement Monday, Sisi’s office said the Egyptian and Jordanian leaders had agreed on “the importance of intensifying efforts” to resume peace talks.

They stressed the talks should abide by the two-state solution long accepted internationally as the basis for a solution: a “Palestinian state based on the June 1967 boundaries with East Jerusalem as its capital.”

Trump’s administration has broken with that consensus, unilaterally recognising the deeply contested city of Jerusalem as capital of Israel and slashing funding for the UN agency for Palestinians.

The Bahrain forum was boycotted by Palestinian Authority, while Jordan and Egypt sent low-level representatives.

The Palestinian leadership has boycotted Trump and accused him of using promises of cash to try to impose political solutions whilst ignoring Israel’s occupation of Palestinian territories.

After meeting Sisi, the Jordanian monarch headed to Tunisia to offer condolences following the death of president Beji Caid Essebsi.