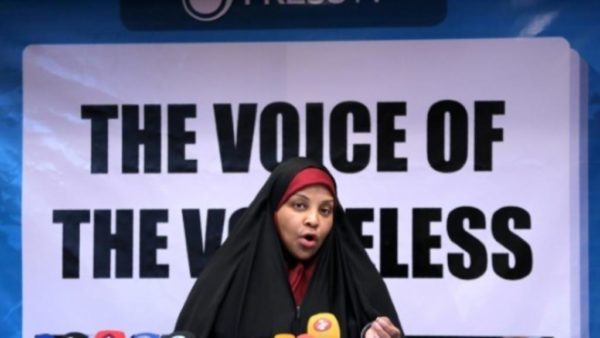 US-born journalist Marzieh Hashemi who works for Iran’s state television Press TV was arrested in the US in January and held for 10 days before being released AFP/File
Share:

Iran on Sunday invited Mike Pompeo to be interviewed by a state television anchor who was once detained in America, after the top US diplomat said he was willing to talk to its people.

Pompeo said Thursday in an interview with Bloomberg that he would “happily” go to Tehran and willingly appear on Iranian television to explain US reasoning behind its sanctions against the Islamic republic.

“Our reporter Ms. Marzieh Hashemi can go and interview (Pompeo) so that he can say what he intends to say,” government spokesman Ali Rabiei said, quoted by official news agency IRNA.

Hashemi, a black Muslim convert who was born in the United States, works as an anchor for Iran’s English-language channel Press TV.

She was arrested in the US in January under a law allowing the detention of people suspected of being potential witnesses in criminal cases.

Hashemi, who changed her name from Melanie Franklin after her conversion, was released after being held for 10 days.

She later travelled to Iran, and has since accused the United States of violence and discrimination against Muslims and black people.

Tehran has been at loggerheads with Washington since President Donald Trump pulled the US out of the 2015 nuclear deal with Iran last year and reimposed punishing sanctions which Iran calls “economic terrorism.”

The standoff has recently escalated with drones shot down and tankers mysteriously attacked in sensitive Gulf waters.

In his remarks on Sunday, Rabiei said Pompeo had been “forced” into saying he was ready to appear on Iranian TV because of his counterpart Mohammad Javad Zarif’s recent round of interviews with US media.

“We do not shy away from hearing what people say, (even though) what they did to our reporters… is an insult to both the media and discussions,” Rabiei said.