“Corporate astronaut”: How billionaires are joining the space race 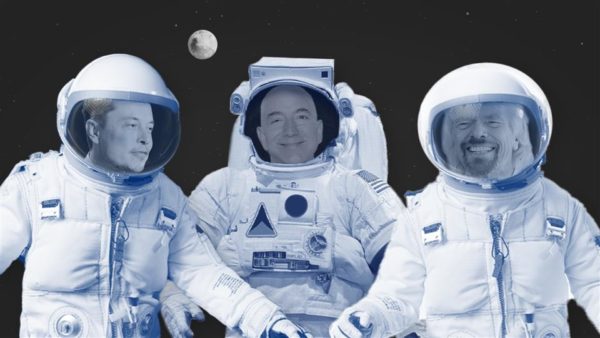 Millions of people watched in wonder as man first set foot upon the moon 50 years ago. But in the era of space travel now dawning, far more of us are destined to join them. In America’s new space age, NASA’s monopoly is over. The leaders are companies, not countries. And anyone with enough money can become an astronaut.

“People want to go to space, people should go to space, because they come back changed,” said Richard Branson, the Virgin-brand billionaire who launched his space tourism business in 2004.  From Virgin Galactic’s spaceport in New Mexico, six passengers per flight will rocket more than 62 miles above Earth for the ultimate selfie.

Six hundred people have pre-paid $250,000 dollars for the chance to fly, including 58-year-old Floridian Maryann Barry.

“It’s my turn and I’m going,” Barry said. “I do want to see what the Earth looks like from space. I want to have that overview effect experience.”

But Virgin Galactic has yet to launch a single paying customer, and will only say that it will happen soon. “It’s taken us fourteen years,” Branson said. “Space definitely is hard. We’ve had our tears. We’ve had out joys. But I’ll tell you what, the joys have been fantastic.”

Another billionaire with his eyes on the stars is Amazon founder Jeff Bezos. His space company, Blue Origin, hopes to launch tourists in a reusable vehicle by year’s end — but the company has yet to start selling tickets. Bezos also want to build the infrastructure to colonize space one day, starting with a presence on the moon.

“I think that’s entirely believable,” Bezos said. “If you went back in time one hundred years and told people today that you would be able to buy a ticket and fly across the world on a jetliner, they would have thought you were crazy.”

When the NASA’s Space Shuttle program ended in 2011, astronauts had only one way to get to the international space station: hitch a ride on the Russian Soyuz. But NASA wants American space taxis – so it hired two companies, SpaceX and Boeing.

SpaceX, the vision of Tesla founder Elon Musk, has built reusable rockets and a sleek space capsule called Crew Dragon. But like Boeing, SpaceX is two years behind schedule, offering only vague promises about when it will fly astronauts.

“We still haven’t launched anyone yet,” Musk said. “But hopefully we will later this year, and that would definitely be the culmination of a long dream for a lot of people.”

SpaceX’s first crew, NASA astronauts Bob Behnken and Doug Hurley, are competitive. Hurley said there’s no question that his team will make it before Boeing’s Ferguson.

“I played a lot of sports competitively. And I have no problem with a little healthy competition,” he said. “And I think it’s better. It makes you better and it makes him better and it makes both companies better — and in the end, who benefits? The country. You know, we get redundant access to space.”

Redundant space access and rockets flying tourists is a giant leap from the footprints Apollo 11 left behind fifty years ago.

“The only reason we can do the things we can do today is because we are, in fact, standing on the shoulders of giants,” Bezos said. “So all of those things that came before are what make it possible for a small team… to go do these amazing things.”