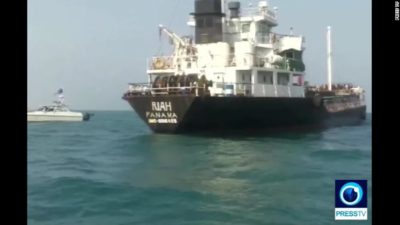 Iran has seized an oil tanker it claimed was carrying 1 million liters of “smuggled fuel,” state news agency Press TV said on Thursday, before later releasing a video purporting to show the tanker.

The semi-official Fars news agency said Islamic Revolutionary Guard Corps (IRGC) forces ambushed the tanker, carrying 12 people on board, on Sunday
The IRGC said it had initially responded to distress calls from a ship on Sunday but when they searched it, they discovered it was a smuggling operation, according to Iranian state media.
The footage released by Press TV later on Thursday shows two smaller vessels maneuvering around a larger ship, with clear markings saying “RIAH” and “Panama.” It is not clear when the video of the tanker was filmed.
Since the weekend, US intelligence have been investigating what happened to the Panamanian-flagged tanker M/T RIAH.
The ship-tracking website Marine Vessel Traffic has not had a current location for the tanker since July 7.
After US intelligence raised fears that the ship had been forced into Iranian waters last weekend, Iran said on Wednesday that it had assisted one vessel suffering a technical glitch.
Share:
Share Tweet Pin It +1
This error message is only visible to WordPress admins