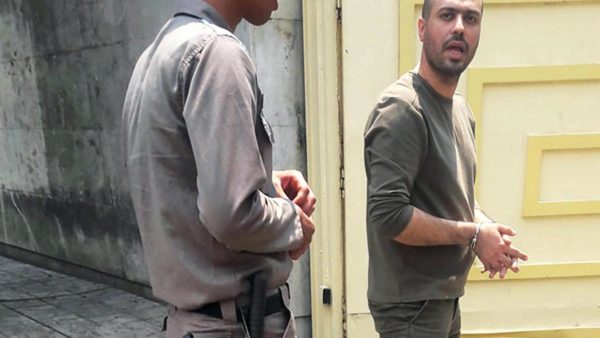 Iranian journalist Masoud Kazemi is seen entering Evin prison in Tehran on May 22, 2019. (Image via Twitter, used with permission)
Share:

Iran has been condemned for handing a lengthy prison sentence to a journalist who reported on corruption in the country.

Masoud Kazemi was arrested in November last year and sentenced to four-and-a-half years in prison on June 3 on national security charges.

The journalist was a reporter for the reformist daily Shargh and also editor-in-chief of Seda-ye Parsi monthly magazine, the semi-official ISNA news agency reported.

Before the trial, the court set a bail at 10 billion rials  for charges of “conspiring against national security”, his lawyer said.

“Fortunately this charge was dropped during the trial… (and) considering the current charges in the indictment we hope the bail is reduced and he can be freed,” Ali Mojtahedzadeh added.

Now, media rights groups are calling for his release and have condemned Tehran for the prison term.

“With this heavy prison sentence, Iran’s Revolutionary Guards Corps is clearly signalling that any journalist who reports on government corruption will face a similar fate,” Robert Mahoney, deputy executive director of Committee to Protect Journalists, said in a statement.

“Masoud Kazemi is a journalist informing Iranian citizens not a criminal undermining state security. He should be released immediately.”

He was detained last year when security forces raided his home but was granted bail before appearing at trial on May 22 on anti-state propaganda charges. His lawyer says he was handed new charges at that trial, such as working against national security.

Eight journalists remain imprisoned in Iran for their work as of the end of December 2018.

Another journalist, Pouyan Khoshhal, was arrested in October over “insults” against Imam Hussein, one of the most revered religious figures in Iran.

A journalist Mir Mohammad Mir-Esmaili was sentenced in August to 10 years of jail over insulting Imam Reza, another holy figure in the country.