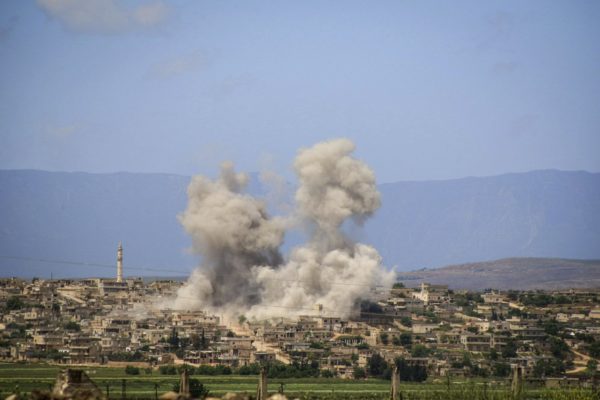 This photo provided by the Syrian Civil Defense White Helmets, which has been authenticated based on its contents and other AP reporting, shows smoke rises after Syrian government and Russian airstrikes hit the town of al-Habeet, southern Idlib, Syria, Friday, May 3, 2019. Syrian state media and activists are reporting a wave of government and Russian airstrikes, including indiscriminate barrel bombs, on the rebel-held enclave in northwestern Syria where a seven-month truce is teetering under a violent escalation. (Syrian Civil Defense White Helmets via AP)
Share:

The recent escalation of violence is the most serious in Idlib province and nearby areas since Russia and Turkey negotiated a cease-fire in September. The shaky truce had averted a major government offensive on the last major rebel stronghold in Syria.

On Saturday, government forces were sending new reinforcements toward Idlib, including tanks, armored personnel carriers and hundreds of troops.

Over the past weeks, government forces have bombarded rebel-held areas while al-Qaida-linked militants attacked army positions around Idlib killing more than two dozen troops and pro-government gunmen over the past week.

“The command’s orders were given to bring these big reinforcements to respond to violations,” a Syrian officer who asked that his name not be made public told The Associated Press. “We are waiting for orders to begin a military operation, God willing, soon.”

The opposition’s Syrian Civil Defense said 22 civilians have been killed and more than 60 wounded in airstrikes and shelling since Friday morning.

The Britain-based Syrian Observatory for Human Rights, a war monitor, reported more than 115 strikes against rebel-held areas on Saturday alone. It said six civilians were killed on Saturday raising to 67 the number of civilians and insurgents killed since Tuesday when the government began its new campaign.

In violence in other parts of northern Syria, Turkey’s defense ministry announced one Turkish soldier was killed and one lightly wounded in northwestern village of Tel Rifaat when Syrian Kurdish fighters shot at Turkish troops. The ministry said Turkish troops launched a counter-attack.

The attack was believed to have been carried out by the Syrian Kurdish People’s Protection Units, or YPG, which Turkey considers a terrorist organization with links to Kurdish insurgency inside Turkey.

The attack came days after YPG militants carried out an attack in a Turkish-controlled region in northern Syria killing a soldier and wounding three others. 2016.