Notre Dame fire strikes at the soul of France 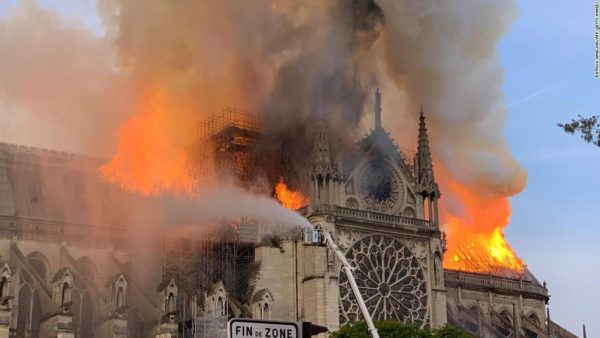 By David A. Andelman

No single catastrophic event has bit so deeply into the core of the cathedral and its soaring spire as Monday’s fire that lit up the city skyline. As thousands lined the banks of the Seine to gaze up at the flames, there were few words to convey their fear that a central part of the French national identity and eight centuries of its precious history had been lost in a single transcendent moment.

I share their sentiment. Since my earliest days in France half a century ago, Notre Dame has always served as a lodestone. And while I never prayed inside, my dearest friends certainly did. Indeed, one told me that she never thought she could feel so deeply about a building as she did Monday night. 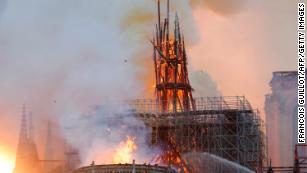 It’s hardly a surprise, then, that French President Emmanuel Macron canceled a televised address to the nation and raced to the scene of the fire. “Like all our compatriots, I am sad this evening to see this part of all of us burning,” he tweeted at 8 p.m. local time.
Indeed, the very name of the cathedral translates to “Our lady of Paris.” And for centuries it has been just that — a symbol of all that is good and nurturing, both for its faithful and for the millions of tourists who pour through its doors every year from every corner of the world.
The present structure dates to the 12th century of medieval France, but its religious roots date far further into France’s past. The cathedral itself is located in Paris’ fourth arrondissement, at the eastern end of the Ile de la Cité, one of two islands where the Seine River divides. This is the oldest portion of Paris, where French kings made their residence when not at the Chateau de Versailles. 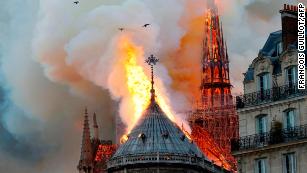 In fact, Notre Dame was built on land where a pagan temple was situated in Roman times. But the cathedral in its current form may be more directly traced to therule of Louis VII, who, in an effort to cement Paris as the true capital of Europe, began work with the blessing of Pope Alexander III on the towering structure that continues to dominate the Paris skyline today. It took at least a century to complete it, but new touches were constantly added for the next half a millennium.
In the 18th century, the French Revolution was hardly kind to a magnificent reminder of the glory of the French kings, and more than 28 statues in Notre Dame were beheaded by the mobs. The leaders of the revolution rededicated the structure to the Cult of Reason, then the Cult of the Supreme Being — still keeping the structure intact, as well as its relation to a god that many questioned. Finally, Napoleon returned the cathedral to the Catholic Church, setting his coronation as emperor inside its magnificent walls.
Stay up to date…

Through the years it became ever more deeply embedded in French culture and tradition — with Victor Hugo situating his novel “The Hunchback of Notre Dame” in the cathedral itself. Its magnificent stained-glass windows, a precious few dating back to the Middle Ages, are equally a symbol of beauty and tradition. Sadly, during the liberation from Nazi control in World War II, the cathedral fell victim to some stray bullets — with some of its most precious medieval glass damaged.

While France is nearly two-thirds Catholic, the Notre Dame blaze remains significant for the country’s entire population — since the cathedral has long served as a central symbol of both French history and culture. And it is for this reason that those grieving can and should take comfort in Macron’s pledge to rebuild the cathedral: “This is probably part of the French destiny. And we will do it in the next years.”
CNN
Share: