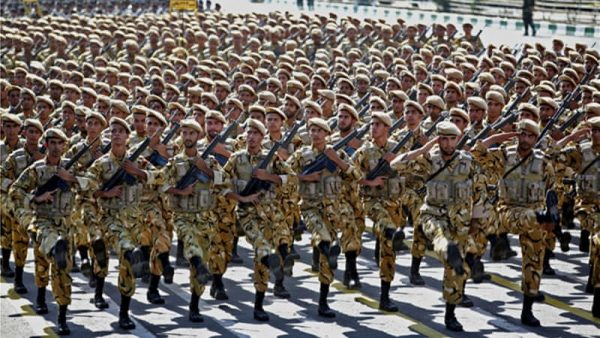 File photo of a parade by The Iranian Revolutionary Guards ( IRGC) in Tehran Iran.
Share:

President Donald Trump announced Monday that the US had designated Iran’s Revolutionary Guards as a “foreign terrorist organization” as part of efforts to increase international pressure on the country.

The US has never before used the “terrorist” designation for a foreign government entity. The United States had already blacklisted dozens of entities and people for their affiliations with the Islamic Revolutionary Guard Corps (IRGC) but not the organisation as a whole.

Trump said in a statement Monday that the move “recognises the reality” that Iran is a state-sponsored supporter of terrorism and that the Revolutionary Guard is an active participant.

“The IRGC is the Iranian government’s primary means of directing and implementing its global terrorist campaign,” Trump said.

Administration officials have said the step will help to further isolate Iran and make clear that the US will not tolerate Iran’s continued support for rebel groups and others that destabilise the Middle East.

The designation will introduce new sanctions, freeze assets and ban Americans from doing business with the group.

Critics have warned the move could subject US military and intelligence officials to similar actions by other governments.

US Secretary of State Mike Pompeo warned banks and business of the new consequences of working with Iran’s Revolutionary Guards.

“Businesses and banks around the world now have a clear duty to ensure that companies with which they conduct financial transactions are not conducted with the IRGC in any material way,” he told reporters.

“No other country has the legal right to designate as terrorist another country’s armed forces … Iran’s influence in the Middle East and its success in fighting against Islamic State are the reasons behind this designation,” state TV said, without quoting a specific official.

“Thank you, my dear friend, US President Donald Trump, for having decided to declare Iran’s Revolutionary Guards a terrorist organization,” Netanyahu said in a statement issued soon after the White House announcement.

“Thank you for responding to another important request of mine, which serves the interests of our countries and countries of the region.”

The terrorist designation is meant to strike at the heart of the Iranian government’s power structure. The elite force was formed after the 1979 Islamic revolution with a mission to defend the clerical regime, in contrast to the traditional military units that protect borders.

Iran’s parliament has vowed to retaliate by passing an urgent bill putting US troops on its own terrorism blacklist, which also features the Islamic State group, the semi-official news agency ISNA reported.

“Even though we believe one should not play along with America’s extreme acts, the reality is that we must retaliate,” the head of Iran’s influential national security and foreign policy commission, Heshmatollah Falahatpisheh, told ISNA.

A statement signed by a majority of lawmakers in support of the bill said any action against Iran’s national security and its armed forces was “crossing a red line” and that the US administration would “regret” its decision.