Arab Israelis vow to boycott vote: ‘The elections have never been so racist’ 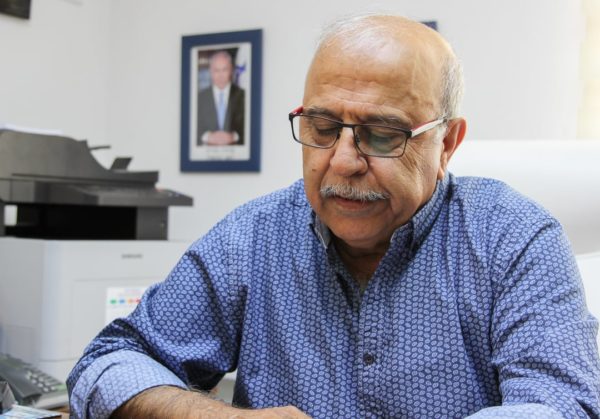 Daliyat el-Karmel mayor Rafik Halabi predicts that only half of Daliyat al-Karmel,the largest Druze village , around 80km north of Tel Aviv, will bother to vote on Tuesday. “We are bitterly disappointed by the policies of this government, we have paid all our dues and duties and got nothing back of our rights,” Halabi says.
Share:

After a particularly difficult year, and ahead of a general election in Israel on Tuesday, many members of the country’s Arab minority say they are refusing to vote in a poll predicted to re-elect Benjamin Netanyahu.

Israel’s estimated 1.9 million Arab population makes up around 20 per cent of the country, and across Druze areas and other Arab communities in Israel, there has been a growing clamour for a boycott.

In the country’s north, the mayor of the largest Druze town in the country, Daliyat el-Karmel smarts at the differences in services he believes are provided to his town, as compared to the nearest Jewish-majority city.

Driving from his town to Yokneam Illit, Rafik Halabi says, is like “going from Benghazi to London”.

Once a poor settlement, Yokneam Illit is now a thriving city, with factories, industrial complexes and major businesses.

At the same time, says Halabi, he has been allocated no budget to provide similar opportunities for his people.

The ruling Likud Party, meanwhile, says the government’s 15 billion shekel (£3.2bn) investment plan for the Arab sector “is the largest such commitment in Israel’s history”, according to Eli Hazan, Likud’s foreign affairs director.

But it is just one of many grievances the disgruntled Arab-Israeli community are feeling in the lead-up to the elections next week.

Halabi predicts that only half of Daliyat al-Karmel, around 80km north of Tel Aviv, will bother to vote on Tuesday, which incumbent Netanyahu, leader of the right-wing Likud Party, is now predicted to win.

“We are bitterly disappointed by the policies of this government, we have paid all our dues and duties and got nothing back of our rights,” Halabi says.

Netanyahu’s government ratified the controversial nation-state law in July which has a constitution-like status and has been described by critics as “apartheid legislation”.

Halabi, like many in his town, believe it has relegated Israel’s non-Jewish population to the status of second-class citizens.

The law defines Israel as a Jewish state, promotes the creation of Jewish-only settlements, removes Arabic as an official language and defines national self-determination as “the unique right of the Jewish people”.

In March the premier wrote on Instagram that “Israel is not a state of all its citizens” triggering further anger.

Israel’s Arab minority comprises mainly descendants of Palestinians who either stayed within their communities or were internally displaced after the 1948 war that surrounded the creation of Israel.

But the Druze, a unique Arabic-speaking religious and ethnic group that practices an offshoot of Islam traditionally served in the army, often identify as Israeli and are fiercely loyal to the state. Many within the Druze community even dispute the label of Arab. They particularly felt the blow.

“The insult against Israeli Arabs is unbelievable,” Halabi says, of the law.

“They built the country, they are in the army, they have jobs in all the hospitals. We are Israel but the state refuses to acknowledge this.”

He says he fears there could be a noisy boycott movement within his town as people felt disheartened.

There had been some hope for Netanyahu’s chief election rival, ex-army chief Benny Gantz, who made a point of visiting Daliyat al-Karmel on the campaign trail.

Gadeer Mreeh, a Druze former TV anchor from Daliyat al-Karmel, is running on Gantz’s party list and is likely to be the first Druze woman in the Knesset, Israel’s parliament.

But Halabi says that during his visit, Gantz, a former paratrooper, dodged questions about whether he would alter or abolish the nation-state law if he came into power and instead said he believed “in equality”.

“We could see a large boycott this year. The nation-state law is the most serious factor that will influence voters in this community. But also the elections have never been so racist,” Halibi adds.

Halabi says some of the campaign videos and slogans demonise Arabs turning them into the “enemy” of the state.

The Likud Party have taken to chanting “Bibi or Tibi” a reference to Netanyahu’s childhood nickname, and Arab Israeli MK Ahmad Tibi, who has been singled out as their chief elections enemy.

The campaign adverts have also zeroed in on their Arab counterparts. In one bizarre campaign video a Likud MK, Anat Berko, is kidnapped by her husband, dressed as an Arab.

In another, Likud MK Oren Hazan appears to shoot dead Arab parliamentarian Jamal Zahalka, a clip which has sparked a police complaint for incitement to murder.

On election day itself in 2015, Netanyahu urged the non-Arab population to go out and vote, saying the “the right-wing government is in danger. Arab voters are heading to the polling stations in droves”.

Across Daliyat al-Karmel questions on the elections are met with depressed shrugs.

Many said the nation-state law was a wakeup call.

“We feel really let down, we give everything to this country and they reply with a law which makes us second class,” says Halabi, a bus driver, who says he is not bothering to vote.

Rafik, a shop owner who has voted for Arab parties in the past, agrees.

“The country is becoming far right and blatantly anti-Arab, I usually vote for the Arab parties but that has given us nothing. Go to the polls for what?”

Rooa says that as a Druze woman she has never been in a worse position.

“As Druze, our men go into the army and die for their country and this is their response. As a woman I have no rights at all.”

In Haifa, a nearby mixed Arab-Jewish city, where many of the residents self-identify as Palestinians, activists handed out leaflets as part of “Popular Campaign to Boycott the Zionist Knesset Elections”.

“This is an attempt to boycott the body that actively tries to erase our Palestinian identity,” Joul Elias, a student from Haifa, says.

Layla Zahrour, who owns a sweet shop in the city, says most people are fed up.

“Whoever you vote for, little changes, and so far everything has just gotten worse.”

Arab politicians have urged citizens to vote, fearing that disillusionment from the Arab communities will impact their already low presence in the 120-seat Knesset.

A popular local rapper Tamer Nafar, of rap group DAM, even put out a video this week saying: “Either we vote, or end up outside of the homeland”.

During the last elections in 2015, Arab parties ran under one list and secured 13 seats out of 120 in the Knesset, making them the third-largest force, which was a historic high.

That alliance has since split and will be running separately, likely reducing the impact on the parliament.

Turnout from Arab voters is expected to be at around 50 per cent, a significant drop from 2015, when turnout among Arab voters was 64 per cent, compared to 72 per cent for all Israelis.

Ahmed Tibi, whose Ta’al party has forged an alliance with Ayman Odeh’s Hadash party, admitted that Arab parties will likely lose seats in this election but still encouraged people to go out and vote.

“Refusing to participate will not help us make change,” he tells The Independent.

He talks of being “demonised and delegitimised” in the Likud Party’s campaign, including comments by culture minister Miri Regev. In February, after Tibi met with Turkish president Recep Tayyip Erdogan, Regev said Tibi was not worthy of sitting in the Knesset.

“I got intimidations and threats on Facebook because of it,” he adds.

‘I hope they don’t open an investigation on us!’ Benjamin Netanyahu jokes with Trump about corruption probe as he gifts him with fine wine

Akram Hasson, a Druze MK in the Kulanu Party which is part of Israel’s ruling coalition, stresses that participating in the elections has never been so vital.

“I am worried but we need this election to change the situation, such as the nation state law – we have to be in parliament to do this,” he tells The Independent.

He cites fears over Netanyahu’s involvement in the merger of ultra-nationalist Jewish Home party and Jewish Power.

Jewish Power is an offshoot of the banned Kach movement, which was outlawed by Israel and the US because of its racist and extremist views.

“If we allow fanatical groups to win, we will never be able to enact change,” Hassoun says.

Arab analysts in Israel said that a split Arab list means they will need more votes to pass the threshold into the Knesset than if they were all under one umbrella.

“We will have less political power at a dangerous time,” says Amir Tuam of the Mossawa Centre.

“These elections are the most bleak. There is no hope for improvement for the status of the Arab community in Israel, not under Bibi, not under Gantz or anyone.”