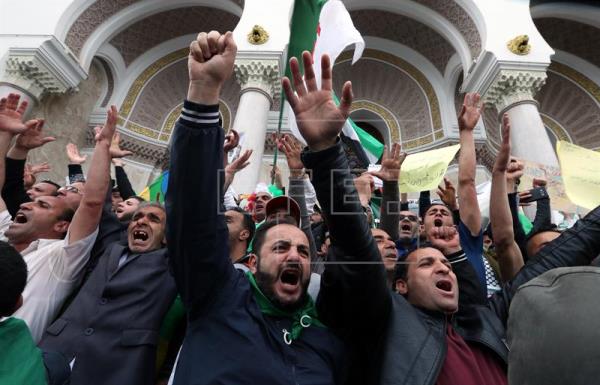 A huge crowd of protesters flooded the streets of Algiers on Friday, the first mass demonstrations since the resignation of ailing longtime president Abdelaziz Bouteflika and a show of strength by those pushing demands for reform.

The demonstrators are calling for the removal of what they see as an outdated and opaque political apparatus, built around the ruling party, army officers, businessmen, unions and veterans of a 1954-62 independence war against France.

“We want to uproot the symbols of the system,” said teacher Ahmed Badili, as the crowds jammed downtown streets.

Algeria’s ailing 82-year-old president quit late on Tuesday after weeks of demonstrations against his bid for a fifth term in office. He had lost the backing of key loyalists including army chief Ahmed Gaid Salah.

“For many people, Bouteflika has simply been the figurehead for an entire system that hasn’t been working for a long time,” said FRANCE 24’s international affairs editor Nadia Massih.

“They see it as an elite that acts for itself, that is deeply corrupt and is not interested in the people,” Massih added.

Opponents of the old regime took to social media calling for a massive turnout on Friday, targeting a triumvirate they dub the “3Bs” – Abdelakder Bensalah, Tayeb Belaiz and Prime Minister Noureddine Bedoui.

Bensalah, speaker of the upper house of parliament for 16 years and a close Bouteflika ally, is to take the reins as interim president for three months until elections are organised.

Belaiz, a minister for 16 years, was named by Bouteflika as head of the Constitutional Council which regulates elections.

Bedoui, until his appointment as prime minister, had served as interior minister – or, as the French-language El Watan newspaper put it on Thursday, “chief engineer of electoral fraud”.

Critics say all three have always been faithful Bouteflika servants, who should follow his lead and resign.

Lawyer Mustapha Bouchachi, one of the leading voices of the protest movement, urged Algerians to continue protesting “until they have all gone”.

“Our victory is partial,” he said in a video posted online. “Algerians will not accept that symbols of the regime […] lead the interim period and organise the next elections.”

All eyes on the army

Protesters are calling for transitional institutions to be set up to implement reforms and guarantee free elections.

Hamza Meddeb, an independent analyst in Tunisia, said Algeria was entering “a very delicate phase, because the street and the institutions are at risk of diverging”.

Algerian newspapers have focused on the role of the military in the transition period, pondering the army’s reaction in the event of continuing protests.

“Will the military institution put all its weight into imposing strict compliance with the constitution […] or push for another consensual political outcome?” asked French-language daily Le Soir d’Algerie.

“How to use the transition,” read a headline in El Watan [see below], next to a drawing of General Gaid Salah, with a whistle in his mouth, leading protesters down a path dubbed “constitutional order”.

Despite abandoning Bouteflika, the army chief is still seen among protesters as one of the key members of the “system” after the president appointed him to the post in 2004.

Liberté, another newspaper, said many Algerians saw Gaid Salah as having backed Bouteflika almost to the end, “even endorsing the option of a fifth term, and only breaking away after the street scuttled him.”

The paper added: “After the Bouteflika clan, it will be the turn of the armed forces chief to face the street.”

No clear successor to Bouteflika has yet emerged. Protesters have made it clear they will reject any candidate with ties to the old guard.

“We are determined to continue this battle. The people will have the last word,” said 27-year-old student Farid Badini.