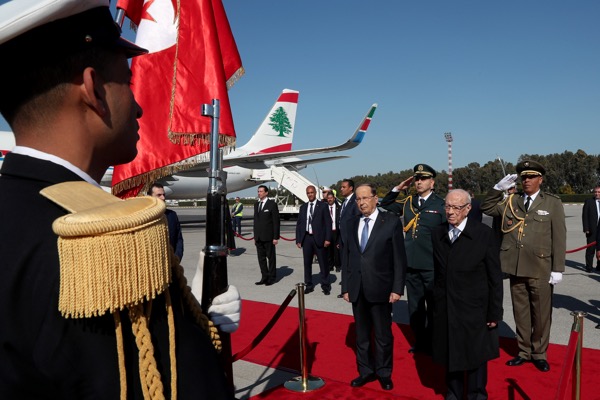 “This land is Lebanese and our people have proved their ability to preserve their rights. Occupation will not have a place on our soil,” Bassil said, responding to a reporter’s question on the fate of the Shebaa Farms and the Kfarshouba Hills in the wake of the U.S. recognition of Israel’s sovereignty over Syria’s Golan Heights, said Bassil during a visit to Bulgaria, a country that has nothing to do with occupied Golan. 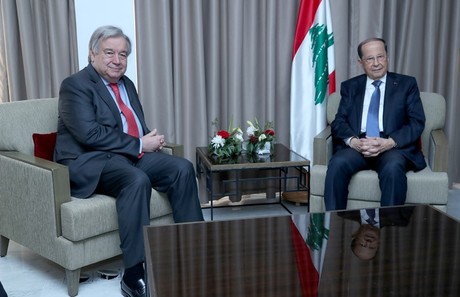 Aoun in Tunisia to attend the 30th Arab League Summit

President Michel Aoun arrived in Tunis Saturday afternoon on the head of a  delegation that included Interior Minister Raya El Hassan, Minister of State for Refugee Affairs Saleh Gharib, Culture Minister Mohammed Daoud and Foreign Minister Gebran Bassil, Foreign Ministry Secretary-General Hani Shmaitili, Lebanon’s Delegate to the Arab League Ali Halabi, Lebanon’s Ambassador to Tunisia Toni Franjieh.  Was met at the airport by President Beji Caid Essebsi. Aoun is expected to appeal to Arab heads of state to help facilitate the return of Syrian refugees from Lebanon to their home country without having to wait for a political settlement to the conflict.

President Michel Aoun Saturday asked U.N. Secretary-General Antonio Guterres’ help in officially demarcating the southern border between Lebanon and Israel, the subject of a dispute between the countries. The issue of officially demarcating Lebanon’s southern maritime border with Israel has in the past few years picked up steam as Lebanon is set  to embark on oil and gas exploration.