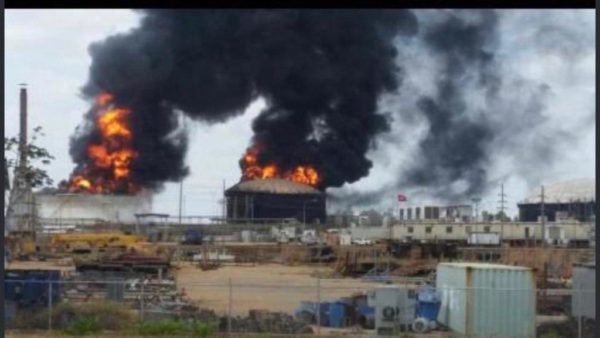 Venezuela continues suffering various unfortunate ‘accidents’. First it was the major blackout. Now, explosions are being reported at the Petro San Felix heavy-crude upgrading project in the eastern part of the country.
Share:

Two storage tanks exploded at a heavy-crude upgrading project in eastern Venezuela on Wednesday, according to an oil industry source and a legislator, while the country’s main oil terminal resumed shipments after a prolonged blackout.

The tanks at the Petro San Felix project were holding diluent, which is mixed with extra-heavy Orinoco belt heavy crude to make it lighter, legislator Jose Brito said in a telephone interview.

“Fortunately there were no injuries,” Brito said.

An oil industry source who asked not to be identified said the two tanks were located at a pumping station associated with the Petro San Felix project.

PDVSA President Manuel Quevedo on Wednesday night tweeted that the company had been victim of “terrorist incursions” by political adversaries of President Nicolas Maduro.

Venezuela’s heavy crude upgrading projects turn tar-like Orinoco crude into more valuable grades of oil. Moving the heavy crude from production fields requires mixing it with some form of diluent that allows it to flow through pipelines.

State oil company PDVSA typically uses either light crude or fuel as diluent. It was not immediately evident what the tanks were holding.

Photos on social media that users said were from the project, in the state of Anzoategui, showed flames coming out of two structures with large black plumes of smoke rising in the air.

The OPEC member’s oil industry is struggling under the weight of sanctions the United States slapped on PDVSA in a bid to force Maduro from power, and from a blackout that began last week that hit the main Jose oil shipment terminal as well as refineries and upgraders.

At Jose, ships began loading on Tuesday with a tanker for transporting oil between domestic ports, Refinitiv Eikon data showed. A second vessel, the Suezmax Fontana chartered by Petrochina and bound for China, finished loading on Wednesday, according to the data.

No oil export tankers had left Venezuelan waters since March 7, the day the blackout began, according to the data.

Upgraders, which had largely been recirculating product to keep the systems running but not producing new product since the blackout began, started coming back online, an industry source said.

The source added that Petropiar, which belongs to PDVSA and Chevron, was close to starting up, while Petromonagas, a joint venture between PDVSA and Rosneft, was expected to take longer to start up.