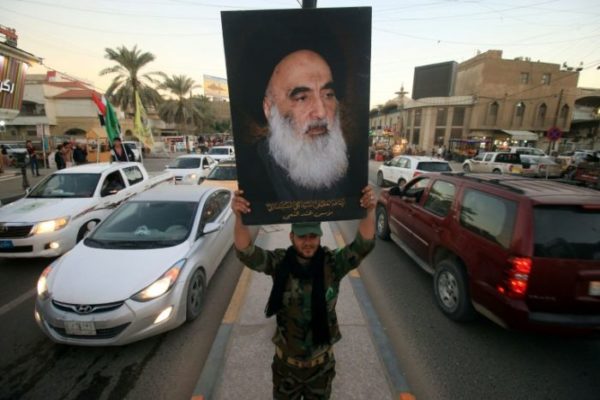 Those forces have since been placed under the command of regular Iraqi forces and several former fighters are now members of the Iraqi parliament.

Iran and Iraq fought a devastating eight-year war in the 1980s but their relations shifted drastically with the American-led overthrow of Sunni Iraqi dictator Saddam Hussein in 2003.

Iran, which like its neighbour has a mainly Shiite population, is now one of oil-rich Iraq’s main trading partners and has close ties to many of its political actors.

Shiite-majority Iraq is walking a fine line to maintain good relations with Iran and its other key ally, the United States, an arch-foe of Iran.

Both have played a major role in the battle against IS jihadists.

Sistani, a spiritual leader to most of Iraq’s Shiites and some in Iran, heads the religious establishment of Najaf, a Shiite holy city in Iraq that rivals Iran’s Qom.

Sistani has long been warning against Iranian influence over Iraq, but agrees that the two neighboring countries should uphold friendly relations.

In 2013, the octogenarian leader refused to meet then-president of Iran, Mahmoud Ahmadinejad.

The United States and Saudi Arabia, consider Iran the main cause for instability in the region, due to its involvement in Lebanon, Yemen and Syria as well as its nuclear program.

Iran’s ties with Iraq is  cause for concern for the US and Saudi Arabia, because Tehran’s access to the neighboring country gives it a passage all the way to the Mediterranean, through its allies Syria and Lebanon.

Rouhani, who is on his first trip to Iraq since becoming president in 2013, hailed his country’s “special” ties with its neighbour, saying they could not be prepared to relations “with an aggressor country like America”.