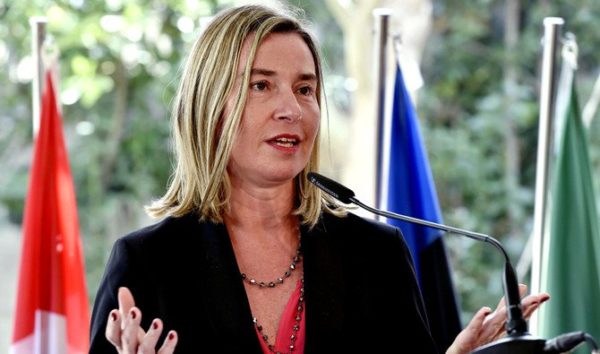 Lebanese President Michel Aoun pledged the safe return of Syrian refugees, with the European Union (EU) confirming it was ready to help in all areas of repatriation.

Aoun met the EU’s foreign policy chief, Federica Mogherini, in Beirut. She had been in Sharm El-Sheikh, Egypt, for a two-day Arab-EU summit and was on the same flight as Lebanese Prime Minister Saad Hariri, who had also been at the summit.

During a meeting with Mogherini, Aoun said: “Lebanon will continue to work to ensure the return of Syrian refugees to safe areas in Syria, and we will not wait for a political solution to the Syrian crisis as it may take long.

“We have received information in Beirut indicating that returning refugees are being cared for by the Syrian authorities, who have provided them with prefabs, infrastructure and schools – the EU and other international organizations can verify this.”

Aoun said that while the EU made political decisions, Lebanon’s were socio-economic, referring to the negative impact of the Syrian refugee population in Lebanon.

He suggested that “international aid should be paid to Syrian refugees after they return home to encourage their return,” explaining that “distributing aid to refugees in Lebanon along with their work here in which they compete with the Lebanese labor force are encouraging them to stay, leading to an increase in the emigration of Lebanese youth.”

Aoun stressed that cooperation between the Lebanese army and the United Nations Interim Force in Lebanon to maintain stability on the southern Lebanese border would continue.

Mogherini briefed the Lebanese president on the outcomes of the summit and also met Parliament Speaker Nabih Berri, who discussed with her the Lebanese-Israeli maritime dispute over the maritime border.

He called on the EU to play an effective role in its demarcation. He also highlighted the need to understand Lebanon’s position on helping Syrian refugees return to their country.

Mogherini and Hariri inaugurated a new EU building, and Mogherini described it as “the best symbol of friendship and family atmosphere” linking the EU with Lebanon.

“The work we are doing in Lebanon in the security and defense sectors are not only for Lebanon but also for the security of Europe. We certainly have political, economic and social dialogues, our bilateral trade is increasing year after year, and investment in Lebanon has become an increasing priority.

“During the Cedar Conference, we pledged to contribute a package of more than 1.5 billion euros until 2020 in conjunction with the reforms scheduled to be implemented, and we learned that the government is determined to implement them.
“Lebanon may be the most European country among Arab countries, and I hope that European students would continue their education in Lebanon.”
Hariri said Lebanon was Europe’s gateway to the Arab world and the Arab World’s gateway to Europe.
“The EU has always supported Lebanon’s sovereignty and independence and continues to be our partner in peace, stability, prosperity and growth, and we are grateful for that.”