Trump is ‘with you 100 %’, Pence tells Venezuelan opposition leader Guaido 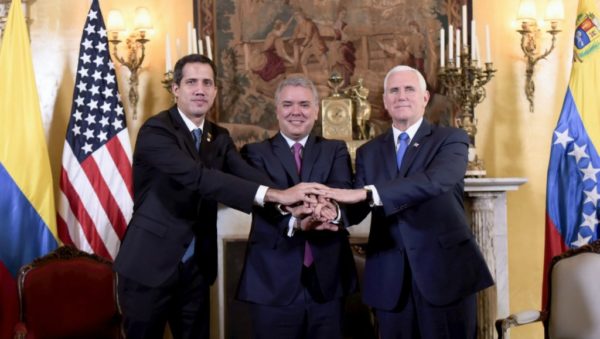 US Vice President Mike Pence passed on a message from Donald Trump to Venezuela’s opposition leader Juan Guaido on Monday, telling him “we are with you 100 percent.”

Pence and Guaido met in Colombia‘s capital during a meeting of regional allies to discuss their next move in response to the crisis in Venezuela.

Guaido warned against “indulging” Venezuela’s President Nicolas Maduro, saying to do so “would be a threat to all of America.”

Colombia’s President Ivan Duque, meanwhile, called on regional allies to create a “more powerful and effective” ring around Maduro to facilitate the transition of power “demanded by the Venezuelan people.”

The Lima Group meeting is taking place following a bloody weekend in which Guaido failed to fulfil his pledge to bring humanitarian aid into Venezuela after a military blockade ordered by Maduro stood firm.

Four people died in clashes on Venezuela’s border with Brazil between security forces and civilians seeking to bring in aid.

Several hundred more were injured in the confrontations at the borders with Colombia and Brazil.

Trump “sent me here to stand with you and to stand with our friends and allies in Venezuela,” Pence told Guaido, who caused a sensation a month ago in declaring himself acting president.

That sparked a power struggle between the National Assembly speaker and Maduro, whom Guaido has branded illegitimate over his disputed reelection last May.

“It’s important to recover democracy in Venezuela because those usurping power today are a threat to the continent’s stability,” said Guaido.

He said on Sunday he was heading to Bogota to ask allies to consider “all measures” in helping end Venezuela’s humanitarian crisis.

Years of recession and hyperinflation have left people suffering shortages of desperately needed food and medicines.

Guaido says 300,000 people could die if the aid isn’t urgently brought in.

Maduro has rejected the aid, though, claiming it would be a pretext to a US invasion.

Before the meeting began, Peru’s Foreign Affairs Minister Hugo de Zela said the Lima Group’s aim was “to find a peaceful solution” to the political impasse.