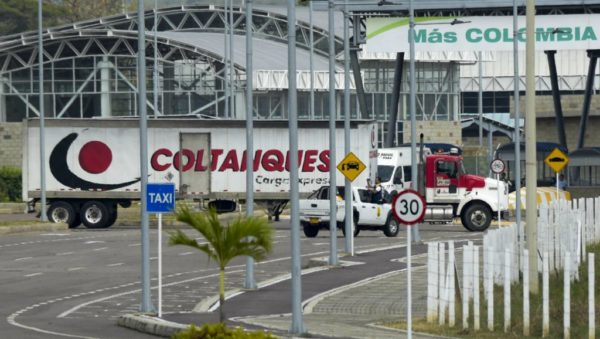 Two semi-trailer trucks containing humanitarian aid from the U.S for Venezuela are escorted by Colombian police in Los Patios, near Cucuta, Colombia, Thursday, Feb. 7, 2019, about 18 miles from the Colombian-Venezuelan border. Venezuela’s opposition leaders requested the shipments and vowed to bring them inside the troubled nation despite objections from embattled President Nicolas Maduro. (Fernando Vergara/Associated Press)
Share:

Trucks carrying US humanitarian aid destined for Venezuela arrived Thursday at the Colombian border, where opposition leaders vowed to bring them into their troubled nation despite objections from embattled President Nicolas Maduro.

Two semi-trailers loaded with boxed emergency food and medicine rolled into the Colombian border city of Cucuta, which is just across the river from Venezuela.

“The United States is prepositioning relief items   including food, nutritional supplements, hygiene kits and medical supplies   in Colombia so they are available to reach those most in need in Venezuela, as soon as possible,” said a US official, speaking on condition of anonymity because he was not authorized to speak publicly about the issue.

The focus of Venezuela’s political fight now hinges on whether Maduro will allow the aid to enter the country, a move anticipated in coming days.

Maduro denies a humanitarian crisis exists and says Venezuela is not a country of beggars. The Venezuelan military has barricaded a bridge between the two nations with a tanker and two cargo trailers in an apparent attempt to block the aid.

Opposition leader Juan Guaido, who requested the international assistance, said it is necessary in a country racked by shortages of food and medicines.

Guaido, who has the backing of some 40 countries, including the United States, is seeking to oust Maduro following a 2018 election that many have denounced as a sham. Long-time allies Russia and China and several other countries continue to support Maduro.

About a dozen human rights activists stood at the gated entrance to the Tienditas International Bridge on Colombia’s side, demanding Maduro allow the emergency aid to cross into Venezuela. They waved flags while Colombian police trucks carrying armed officers and other authorities drove by throughout the day.

Luis Escobar, a Venezuelan who now lives in Colombia after fleeing his crisis-ridden nation, said his wife has advanced breast cancer and urged Maduro to accept the aid.

In tears, he described how his wife was unable to get treatment in Venezuela and that by the time they were able to see a doctor in Colombia, her illness had significantly progressed.

“I am here because, unfortunately, my wife is going to die,” Escobar said. “But today I am here for Venezuelans who are suffering the same as my wife. The world has to know about this.”

“A murderer like Borges must set aside hypocrisy,” Rodriguez said. “There’s no democracy, no humanitarian aid. What will he say, now that his own accomplices gave him away?”

Rodriguez showed a videotape of what he said was a confession from retired national guard Col. Oswaldo Garcia Palomo as proof of the alleged plot. An outspoken Maduro critic, Palomo has openly spoken of amassing a military force in exile to remove the Venezuelan leader from power. He was arrested last month after he entered Venezuela clandestinely from Colombia.

Also Thursday, a coalition of European and Latin American nations called on Venezuela to hold free and transparent elections to peacefully resolve its crisis.

A majority of 14 countries in the “International Contact Group” urged Venezuela to return to the rule of law and respect its constitutional institutions   starting with the democratically elected National Assembly.

Spain, Italy, Portugal were among European nations signing the declaration with Uruguay, Ecuador and Costa Rica. Mexico and Bolivia participated but didn’t sign.

EU foreign policy chief Federica Mogherini said that the coalition does not intend to impose a solution but is focused on finding answers to avoid violence or foreign intervention in Venezuela.

“We can have different points of view and readings about the causes of the crisis,” Mogherini earlier told the gathering in the Uruguayan capital, Montevideo. “But we share the same objective, wishing to contribute to a politically peaceful and democratic solution.”

Puerto Rico’s government, meanwhile, said 3,600 pounds (1,633 kilograms) worth of donated supplies are en route to Venezuela. Officials have said the aid is not part of the $20 million in aid pledged by the United States.

Puerto Rico Secretary of State Luis Rivera Marin said a plane carrying the supplies left the US territory on Wednesday but has not yet delivered them.