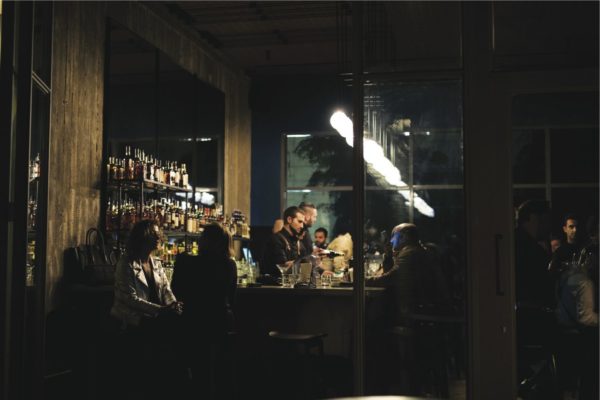 When it comes to the food and beverage (F&B) industry, Lebanon is a country of contradictions.

Although no exact figures are available, those in the industry largely believe that almost the same number of restuarants that closed have also opened. In certain areas, such as the summer hotspot Broummana or in Gemmayze with its restaurants, footfall and the number of new venues is increasing, while in other areas, such as Jounieh and Antelias, customer traffic is slowly dying down. The country is facing an economic crisis, and yet many of the city’s restaurants and bars are abuzz with people having a good time.

Operating a restaurant or club in such a mercurial economic climate is not an easy task, and indeed many have failed. Today, only the fittest in the industry are surviving and growing their businesses, despite decreasing purchasing power among locals and tourist levels still down from their height in 2010. These F&B operators share their frustrations, but also their triumphs and the secrets of their success with Executive.

Although local economic experts speak of the low purchasing power among Lebanese, it seems this has not significantly affected their habit of going out. Those who operate medium- to high-end nightlife concepts tell Executive that clients continue to frequent their outlets. Toni Rizk, CEO of TRI Concepts, which operates The Bohemian and Trumpet, says The Bohemian in Mar Mikhael has witnessed a 30 percent growth in revenues as compared to 2017, and that his seasonal outlet Trumpet, in Broummana, also grew 20 percent.

Meanwhile, a lunchtime drive by the upscale restaurants in Minet el-Hosn, in Beirut’s Downtown—known for attracting bank executives and company CEOs working in the area—or a nighttime stroll through Mar Mikhael, or a trip to the seaside arena street in Downtown—where several of the city’s nightclubs are located—confirms that the cultural desire to socialize is still thriving, among a segment of society at least.

This attitude, along with Lebanon’s rising reputation as a foodie destination, has encouraged new operators to invest in F&B concepts in Lebanon, despite the risks. “In terms of the economic climate in the country, there is nothing very encouraging for opening a new business. But knowing the culture here—how we want to have a good time no matter what—and also knowing how Lebanon is becoming a destination for the food and beverage industry, we were motivated to go ahead with Zimi,” says Ali Daoud, one of the three partners (along with Rami Demirdjian, the main investor, and Barbara Massaad, food consultant and chef) behind the Mediterranean restaurant, which recently opened in Gemmayze.

When the going gets tough

Although things seem rosy on the surface for some F&B outlets, digging a little deeper reveals that the regional and local economic situation has taken its toll on even the most resilient F&B operators.

Tourist numbers in Lebanon have been increasing year-on-year since 2014. However, these increases have not yet made up for the plummet in tourism numbers between 2011-2013—and so far in 2018, the numbers are trailing close behind 2017 figures. Amid these challenges, F&B operators have been relying more on Lebanese expats enjoying a vacation at home than foreign tourists—but even the expats have their share of economic problems. “Lebanese expats are suffering because of the regional economic crisis, and this is affecting the money that comes into Lebanon,” says Dany Aprat, managing partner at Tavolina, an Italian restaurant in Mar Mikhael, and more recently at Slate, a casual chic international restaurant, also in Mar Mikhael.

Samer Rizk, co-owner of Downtown’s rooftop bar Capitole, and wine bar and restaurant Stem in Monot, also speaks of expats in the region not making as much money as before, noting that they have been visiting Lebanon less and staying for much shorter periods than they did in previous years. Instead, he explains, they are traveling elsewhere to have new experiences and enjoy a proper vacation away from what he describes as the somewhat “unhappy feel” that has fallen over Beirut since November 2017 (the time of then-Prime Minister Saad Hariri’s since-rescinded resignation).

More players in the game

Despite the bleak scenario, the F&B industry continues to attract investors, be it ones who are new to the market or seasoned operators expanding their businesses.

Operators of seasonal summer venues are continuing to open winter-only venues as a way of retaining their staff—whom they have invested time training and would not want to replace every year—and their clients’ patronage. The latest such model is McQueen, a winter-only bar-restaurant opening December 2018 in Saifi, which its owner, Samer Rizk, says will have the same spirit and clientele as Capitole as the natural extension of its summer counterpart.

Events manager Alain Hadife’s Zero 4 cluster in Naccache finally opened its doors in early 2018 and once again brought forward the debate regarding clusters versus standalone venues. Aprat, who opened Tavolina’s second branch in Zero 4, says it all depends on the synergy between the cluster operators and the tenants. “I tend to prefer being a standalone [venue], but I don’t mind being in a cluster if we are aligned [with other operators] on the same vision. But when you are alone, you definitely are freer to make any decision you want, whereas in a cluster you have to abide by certain guidelines.”

Samer Rizk, who experienced being in a cluster with Trumpet in The Village Dbayeh, also says that being a standalone venue allows for more freedom, for example, in which type of music one wants to play or what events to host.

Gemmayze is once again returning to the spotlight, but this time as a creative culinary destination rather than as a bar-hopping strip. “The rents went down after the demand decreased around three to four years ago when Mar Mikhael began,” says Zimi’s Daoud. “This encouraged some investors to open new F&B concepts here and they did well. Their success got people used to the idea of going out in Gemmayze again, which in turn encouraged other restaurants to open. So gradually it’s becoming an F&B street. We are complementing each other and catering to all ages without competing with each other.”

The upper part of Monot Street in Ashrafieh is emerging as a destination for medium- to high-end eateries. Samer Rizk says he chose this area for Stem because of its authenticity and charm—a residential street with a mix of old buildings and high rise towers. He says the neighbors often stroll down for a bite, which adds to his footfall. Toni Rizk also chose to open his newest concept, an Andalusian bar-restaurant called Almodovar, in this corner of Monot. “We liked the area because the venues are big, well-designed, and run by established operators. We feel that the area can live for 10 years and more,” he says. He notes that the limited spaces available for new venues to enter makes the area even more attractive to him because of the certainty of no overcrowding.

Seasonal outlets in mountainous areas outside of Beirut are still a preferred way of escaping the summer heat, and F&B operators have continued to invest in such projects. This year, Broummana was the destination of choice, with about a dozen new concepts opening there in summer 2017, causing traffic problems and increased competition.

The effects of oversaturation are also being felt in Mar Mikhael, which often feels like a long parking lot. The congestion has the area’s residents, the outlets’ clients, and even the operators themselves complaining. This bedlam, says Toni Rizk, could be resolved by regulating the sector. “When we first opened four years ago, Mar Mikhael was a lot calmer,” he recalls. “Today, it has become overcrowded, and this is negatively impacting business as there are more complaints from residents and thus more inspections from the concerned ministries. This is because there is no regulation in this industry—they give licenses to everyone on the same street, and when it gets oversaturated and people complain, they start fining the business owners who have already invested in their business. They should limit the number of venues per street from the beginning.”

Given such a competitive environment, it is no wonder that only experienced operators have managed to keep their outlets full. For Aprat, who has successfully been running Tavolina for seven years now, it all lies with the four Ps of marketing: price, product, promotion, and place. “In university, they teach you about the four Ps, and you can apply them to running a restaurant business as well,” he says. “It’s that simple, but it’s not easy because you have to be able to combine these four principles well, or else it won’t last.”

Toni Rizk also believes that consistent good management—which manifests itself in good service, food and drinks, and ambiance—is key, and cites it as the reason why The Bohemian has remained popular for four years now, while other venues in Mar Mikhael have opened up and shut down within a year.

Barbara Massaad, chef at Zimi, believes restaurants succeed when they have a soul. “People are realizing that restaurants need to have people behind them,” she says. “Typically, restaurant operation is more of a business, or copy paste, or impersonal, but I am happy to see now in Lebanon that more and more restaurants are opening where you have the personification of the owner, or the chef, or the person working in that restaurant, and this is what is needed. Because of the tough economic times we’re passing through, it’s a survival of the fittest environment, and this is where you are going to see authentic concepts with heart surviving.”

Christine Hauser also believes that the Lebanese are looking for a food experience these days. “People in Lebanon don’t want to feel like they are being ripped off anymore, so we want people to feel that they got their money’s worth in terms of food quality and variety when they come to our restaurant, especially since everyone is cost conscious these days,” she says, speaking of her new restaurant  Alma located in Bosa Nova hotel, also for Hauser, in Sin el-Fil.

As another year wraps up, those in the F&B industry are already energetically working on realizing their 2019 goals and expansion plans, despite the challenges they continue to face. This is because they recognize that they operate in a sector that never sleeps, and through which the Lebanese will continue to enjoy their days and nights, come what may.

Nabila is Executive’s hospitality, tourism and retail editor. She also covers other topics she’s interested in such as education and mental health. Prior to joining Executive, she worked as a teacher for eight years in Beirut. Nabila holds a Masters in Educational Psychology from the American University of Beirut.