Russia warns Cyprus against allowing U.S. military to deploy there 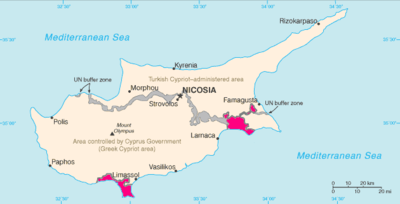 Russia on Wednesday warned authorities in Cyprus not to allow the U.S. military to deploy on their territory, saying such a move would draw a Russian reaction and result in “dangerous and destabilizing consequences” for the Mediterranean island.

Maria Zakharova, a spokesman for Russia’s Ministry of Foreign Affairs, said Moscow had become aware of what she called “anti-Russian plans” involving Cyprus and the U.S. military which she said was eyeing setting up forward operating bases for its troops there.

“We’re getting information from various sources that the United States is actively studying options to build up its military presence on Cyprus,” Zakharova told a news briefing in Moscow.

“The aim is not being hidden – to counter growing Russian influence in the region in the light of the successful operation by the Russian military in Syria.”

There was no immediate U.S. response to her comments.

Prodromos Prodromou, a spokesman for the Cypriot government, said the island had no desire to further militarize.

“We want to clarify that it has never been our aim, nor do we seek the militarization of Cyprus,” he said, responding to Zakharova’s remarks.

“The Republic of Cyprus, because of its advantageous geographical position, offers facilities for missions of a humanitarian nature, and then only in cases where countries make a request or have a relevant MOU (memorandum of understanding) with the Republic.”

Zakharova said a U.S. delegation had inspected potential sites for the bases and that Washington was engaged in intensive talks with Nicosia on expanding military cooperation.

Cyprus is a popular destination for Russian tourists  and many wealthy Russian business people bank or own property there. The island, a former British colony, hosts two British military bases. The United States has an embassy in Nicosia.

Cyprus was split by a Turkish invasion in 1974 that followed a Greek-inspired coup. Northern Cyprus is now a Turkish Cypriot state of about 300,000 people that is recognized only by Turkey. Greek Cypriots run the island’s internationally recognized government which represents the whole island in the European Union.

Cypriot media said the island had recently appointed a military attache to Washington.

Zakharova said Russia had repeatedly warned Cypriot authorities against allowing the island to be further militarized.

“It being drawn into U.S. and NATO plans in the eastern Mediterranean and the Middle East will inevitably lead to dangerous and destabilizing consequences for Cyprus itself,” she said.

“In Moscow we can’t ignore the anti-Russian element in these (U.S.) plans and in the event that they are implemented we will be forced to take counter measures.”