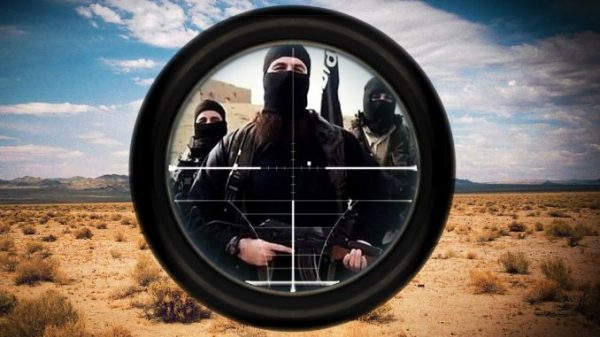 The latest threat circulated online follows other message from jihadists that have specifically cited Jan. 1 in calling for attacks.

One poster distributed online in mid-November superimposed a masked jihadist wielding a bloody knife over a collage of images from the 2016 Berlin Christmas market attack. It stated that New Year’s Day is “the date of retribution.”

Shortly after that, an ISIS-backing media group released an image of a demolished cityscape with multiple fires, warning, “Soon, Allah willing, the disbelievers will see the very thing they feared: 1-1-2019.”

That same group just released an image of an armed jihadist overlooking New York, stating the city named with a blood-splashed 1/1/2019.

They attribute the directive to late ISIS spokesman Abu Muhammad al-Adnani, the terror group’s chief of its external operations who was killed in a U.S. airstrike in 2016.

ISIS-backing media groups and other followers, who form an online support network that creates and disseminates propaganda for recruitment and incitement on behalf of the terror group, waged a significant offensive last year calling for holiday attacks. Everitt Aaron Jameson of Modesto, Calif., pleaded guilty this summer to plotting a Christmas 2017 attack at Pier 39, a popular tourist spot in San Francisco; he loved with a heart on Facebook a poster from ISIS supporters showing Santa overlooking Times Square with a box of dynamite at his side.

In late October, a prolific ISIS-supporting media group, Al-Abd Al-Faqir, issued two assassination threats against Pope Francis in what appeared to be a revival of last year’s holiday push by the terror group for violence against the Vatican and Catholic Church.

As Christmas gets closer, another ISIS-backing group released an image this past week showing a trio of ISIS flags above the Vatican and a trio of jihadists on Via Della Conciliazione.