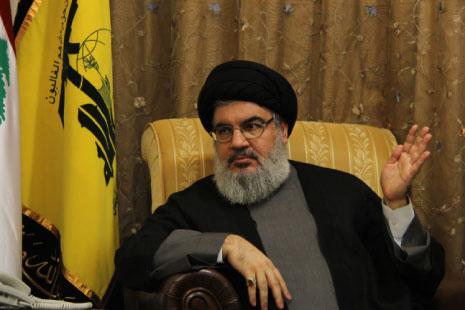 The leader of the Lebanese Shi’ite group Hezbollah insisted that one of its Sunni allies be given a portfolio in a new Lebanese cabinet, and indicated it would be ready to go back to square one in negotiating a government if necessary.

In a televised speech on Saturday,  Hassan Nasrallah also warned Israel that his Iranian-backed group would respond to any attack on Lebanon and urged his country to withstand diplomatic pressure over its rocket arsenal.

Hezbollah’s demand for one of its Sunni allies be given a portfolio in the new Lebanese government is at the heart of a row that has obstructed a final agreement six months since a parliamentary election.

The formation of a new government is necessary before any moves can be made towards fiscal reforms which the International Monetary Fund said in June are needed immediately to improve debt sustainability.

Hezbollah says one of its Sunni allies must be represented in the government to reflect their election gains.

But Prime Minister-designate Saad al-Hariri, who is Lebanon’s main Sunni politician and enjoys Western backing, has ruled out allocating any of his cabinet seats to them.

Nasrallah said rejecting a Sunni ally from its “March 8” camp amounted to exclusion of a section of Lebanese.

“We were sincere when we spoke of a national unity government. There is no national logic, or moral logic, or legal logic … for anyone in Lebanon to come out and say ‘it is forbidden for the March 8 Sunnis to be represented in the Lebanese government,” Nasrallah said.

“If it is forbidden, come let’s talk again from the start,” he said, adding: “We don’t want conflict, or tension, or escalation.”

President Michel Aoun vowed earlier on Saturday to find a solution to the problem. Though a political ally of Hezbollah, Aoun has sided with Hariri in the row.

Hezbollah, groups and individuals that support its possession of weapons won more than 70 of the 128 seats in the May 6 parliamentary election.

Hezbollah is proscribed as a terrorist group by the United States. The group last fought a major conflict with Israel in 2006, since when it has grown militarily stronger as a major participant in the Syrian war.

Nasrallah said Israel had recently tried to increase pressure over the group’s rocket arsenal and to create “a state of intimidation and threat that if this matter is not dealt with, it (Israel) will deal with it”. Israel had used “the Americans and even some European states” in this effort, he said.

“I say to Lebanon that it must bear this level of diplomatic pressure,” Nasrallah said. “Any attack on Lebanon, any air strikes on Lebanon or bombardment – we will certainly respond,” he said,

Progressive Socialist Party leader Walid Jumblatt held Hezbollah and Iran responsible for the government formation delay by “inventing” the so-called Sunni obstacle,”  he warned that if the  current crisis continue, “it will lead to an economic disaster and the deterioration of the Lebanese lira because it is not simple that the debt of a small country like Lebanon has already reached 100 billion dollars”

“Obstructing the government formation by fabricating the Sunni obstacle, comes in the context of the reactions of Iran and Hezbollah to the recent US sanctions. Therefore, the process of forming the government has become part of the US-Iranian conflict,” Jumblat said in an interview with al-Joumhouria daily on Friday.

Lebanese President Michel Aoun said on Saturday that a solution would be found to a political row that has blocked the formation of a new national unity government for more than six months .

The country is in dire need of a government able to implement economic reforms that the International Monetary Fund (IMF) says are necessary.

Aoun  said no effort would be spared to resolve the problem.

“The matter requires bravery and patience to reach the end, but we will find the solution because waiting is a waste of time,” a statement from the presidency cited Aoun as saying in a meeting with the head of the Melkite Greek Catholic Church.

A statement from Hezbollah on Saturday said the group’s leader, had met with Aoun’s son-in-law and close advisor Gebran Bassil to discuss the formation of a government and efforts “to resolve the complications”.