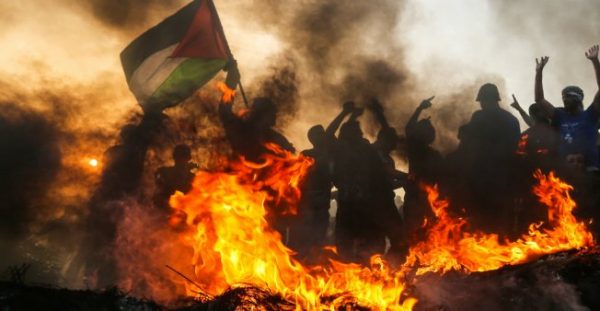 © Mahmud Hams, AFP | A Palestinian protester waves a national flag during a demonstration on the beach near the maritime border with Israel, in the northern Gaza Strip, on October 22, 2018.
Share:

Israeli forces shot and killed four Palestinians and wounded 232, 180 of them from live fire, during protests along the border with Gaza on Friday, Palestinian medical officials said.

The Israeli military responded with air strikes at three positions belonging to Hamas, the Islamist group that rules the Gaza Strip, an army statement said.

It said 16,000 Palestinians had gathered along the Gaza border and hurled grenades, firebombs and rocks at Israeli troops, who responded with “riot dispersal means” and live fire when required.

Later, sirens sounded in Israeli towns and communities around the Gaza Strip to warn that militants had launched rockets. The military said the Iron Dome missile interceptor had taken down several of about a dozen rockets fired.

Gaza residents then reported more Israeli air strikes. No casualties were reported from either the rockets launched at Israel or from the air strikes in Gaza.

Palestinians have been protesting along the border since March 30, demanding an end to Israel’s blockade of the territory and the right to return to lands from which they fled or were driven when Israel was founded in 1948.

Since the protests began, 212 Gazans have been killed by Israeli troops, according to Palestinian Health Ministry figures. An Israeli soldier was killed by a Palestinian sniper.

Egyptian security officials have in the last two weeks been talking to Israeli leaders and officials of Hamas, which runs Gaza, and other factions in an attempt to restore calm along the border.

Fawzi Barhoum, a Hamas spokesman, said protests would continue “until we achieve our goals, and foremost is ending the blockade of the Gaza Strip”.

In the Israeli-occupied West Bank, troops shot dead a Palestinian protester, Palestinian medical officials said, after he was involved in a clash with Israeli soldiers in the village of Al-Mazraa Al-Gharbeya.

Hamas said the dead man was a member of their group and had previously served a two-year term in an Israeli jail.

The Israeli military said dozens of protesters hurled rocks and explosives at troops who responded with “riot dispersal means” and who fired live rounds in cases when there was a direct threat to life.

An army spokesman said the military was aware there had been a fatality and a number of injured among the Palestinians and said the incident was being investigated.