After a year of setbacks, Palestinians see a few bright spots 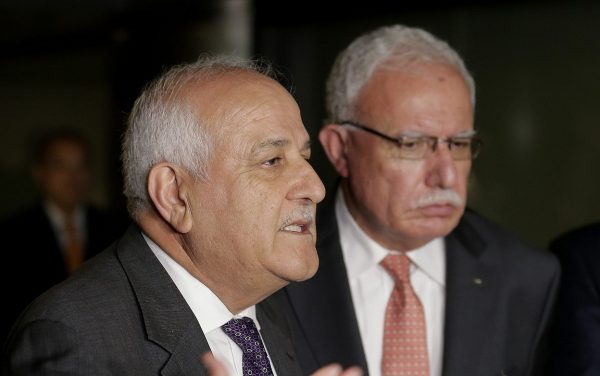 NEW YORK — The Palestinian ambassador to the United Nations has been busier than ever since the observer mission he heads stopped talking to American diplomats.

Last week, Riyad Mansour hosted a reception for diplomats from 40 countries the Palestinians are encouraging to get involved in their negotiations with Israel, effectively downgrading Washington’s role as the premier broker.

He accompanied Mahmoud Abbas, president of the Palestinian Authority, to a meeting with U.N. Secretary General António Guterres, who reiterated his support for the U.N. Relief and Works Agency, which assists Palestinian refugees. Mansour also helped collect $118 million in pledges to partially make up for U.S. funding cuts to UNRWA, which the Trump administration views as an “irredeemably flawed operation.”

On Thursday, Mansour was elected to the presidency of the Group of 77, the largest bloc of developing nations. The position, which speaks for countries representing 80 percent of the world’s population, gives the Palestinians a notable voice at a time when their relations with the United States are virtually nonexistent.

Despite the abysmal state of U.S.-Palestinian interactions, Mansour scoffed at the suggestion that this has been a year of retreat.

“It was only a few years ago that we changed our status to an observer state and we were able to join 100 treaties and conventions as a state,” he said in an interview in a U.N. lounge overlooking the East River.

So far, support for Palestinian causes at the United Nations has done little to improve prospects for peace with Israel or living conditions for most Palestinians, particularly those in the Gaza Strip.

The government of Israeli Prime Minister Benjamin Netanyahu is closer than ever to the Trump administration, and the administration is a staunch defender of Israel at the United Nations.

In the past year, the United States has dropped out of the U.N. Human Rights Council, citing its “unrelenting bias” against Israel. It recognized Jerusalem as Israel’s capital, a step previous administrations considered a matter for final status talks, and moved the U.S. Embassy to the contested city. It closed down the PLO office in Washington, citing its lack of progress in joining negotiations with Israel. And it cut financial aid to Palestinians, including $300 million to UNRWA that helped fund secular schools in Gaza.

Trump has vowed to present a peace proposal within a few months, overseen by his son-in-law and adviser Jared Kushner and special envoy Jason Greenblatt.

In a meeting at the U.N. of the Ad Hoc Liaison Committee, a 15-member committee of donor nations, Greenblatt urged Europeans to condition future aid on changed behavior by the Palestinian Authority. He said the Palestinian Authority had spurned economic opportunities because of “an anti-normalization prejudice towards doing business with Israelis.” And he urged them to shun Hamas as a terrorist group.

On the same day, Abbas addressed the U.N. General Assembly, threatening to “give up all responsibility” for Gaza if Hamas does not agree to a reconciliation deal with the Palestinian Authority.

Mansour declined to elaborate on Abbas’s remarks, saying only that “he said what he said.”

He was dismissive of efforts by Nikki Haley, the U.S. ambassador to the United Nations, to prod reforms in the Palestinian Authority and the United Nations, saying they had been ineffective in eroding support among most other nations. He cited a December vote in the General Assembly in which 128 nations condemned the Trump administration’s recognition of Jerusalem as Israel’s capital, while only seven countries besides the United States and Israel opposed the measure. He also noted that a U.S. draft resolution in the Security Council in June condemning Hamas for the violence in Gaza was rejected 14 to 1, with only the United States favoring it.

Mansour said he does not know what is in the administration’s pending peace plan. But he considers U.S. actions such as recognizing Jerusalem without concessions to be “mind boggling.”

“You give them Jerusalem, off the table, for free. The refugees, for free,” he said. “You destroy UNRWA, for free. What is the incentive for Mr. Netanyahu to come to negotiations? What is left on the table to be considered?”

Mansour lamented the poor state of relations with the United States but indicated there is little room for concessions.

Carol Morello is the diplomatic correspondent for The Washington Post, covering the State Department. She previously wrote about demographics and the census. She has worked at The Post since 2000. Before that, she was a reporter for the Philadelphia Inquirer and USA Today