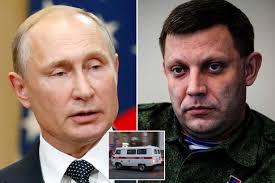 The leader of Russian-backed separatists in the Donetsk region in eastern Ukraine has been killed in a blast at a cafe in Donetsk city, the separatist administration said on Friday.

Alexander Zakharchenko, who led the self-proclaimed Donetsk People’s Republic since 2014, died “as a result of a terrorist act”, the separatist-run Donetsk News Agency reported.

Russia‘s Foreign Ministry said it had every reason to believe Kiev was responsible for Zakharchenko’s death, RIA news agency said.

Foreign Ministry spokeswoman Maria Zakharova said Zakharchenko’s death showed that Kiev had decided to engage in a “bloody fight” and had passed up on its promises of seeking peace, RIA reported.

Russian-backed rebels threw off Ukrainian central rule in an armed uprising after pro-Western leaders opposed by Moscow came to power in the Ukrainian capital, Kiev, in 2014.

Zakharchenko, a 42-year-old former coalmine electrician, became leader of the Donetsk Republic in November 2014. Other rebel leaders say he was handpicked for the role by Moscow. A vote held by separatists confirmed him in office.

The separatists have blamed Ukraine for previous attacks inside rebel-held territory.