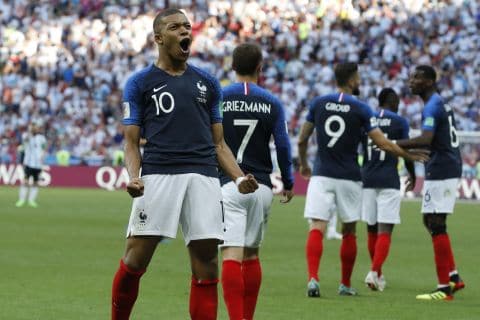 France’s Kylian Mbappe celebrates after scoring his side’s third goal during its round of 16 match on June 30 against Argentina at the 2018 World Cup in Kazan, Russia. (David Vincent/AP)
Share: 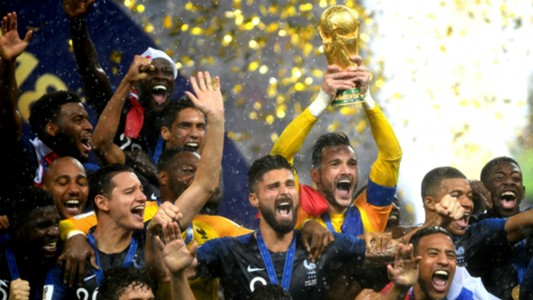 The team’s success is particularly noteworthy because of the way in which anti-immigrant sentiment, especially against migrants with African roots, has roiled French society over the past two decades. In 2005, racial and urban unrest gripped suburban housing projects outside of Paris in the wake of the death of two teenagers who were electrocuted in a substation after being chased by police. And just last month, riots erupted in the French city of Nantes, two hours outside of Paris, after a young Guinean immigrant was shot and killed after being stopped by the police.
Clashes over police brutality, racial justice and economic opportunity shape debates across Europe and the United States regarding who deserves the right to be a citizen. Immigrants with African roots populate all parts of French society, particularly the areas that require hard, at times poorly paid and dangerous labor. Many of these immigrants — and citizens — are connected to France and the larger European Union’s colonial past.
France’s championship-winning World Cup team features no less than 15 players with African roots, including the dynamic 19-year-old forward Kylian Mbappe, who is descended from an Algerian mother and Cameroonian father. The team’s pan-African make-up goes a long way toward helping the world — including European soccer fans who have chanted ugly racist slogans against black players — reimagine the most popular sport on the planet and what it means to be a citizen.
France’s at times toxic debate over immigration anticipated America’s contemporary global debate over immigration, one that scapegoats the most vulnerable populations as thieves, rapists and murderers. England’s decision to leave the European Union, what’s become popularly known as “Brexit,” came in the wake of a xenophobic campaign that smeared immigration as spelling the death knell of a racially pure British identity.
The United States of America’s pride in its longstanding immigrant roots and history as the world’s greatest melting pot took a drastic detour during the 2016 presidential election. Donald Trump’s increasingly vitriolic denunciation of immigrants became the hallmark of his stunning presidential election — a victory that represented a decisive setback for those who argued that racial, ethnic and religious diversity strengthened, rather than harmed or disrupted, democracies.

The racial and ethnic diversity of the French World Cup team offers another, more optimistic, lesson about immigration, globalization and citizenship. While the entire team will be hailed as heroes in France, those of African descent still face discrimination based on the color of their skin. Countless numbers of African immigrants, including those fleeing war zones, face daunting prospects of gaining entrée into France for themselves and their families.

The French people’s warm embrace of African sports icons should be extended to the large numbers of immigrants from across the African and Caribbean diaspora who are seeking a refuge against man-made and natural disasters in their country of origin.
And we can look to the French support of Mbappe and his fellow teammates for guidance. From Mbappe’s Parisian suburb of Bondy and beyond, French citizens — young and old — have proudly hung French football banners, worn Mbappe jerseys and shouted words of encouragement for the team’s players.
In short, the World Cup champions remind us all that, in an era of globalization, racial and ethnic diversity represent an enduring strength at all levels of society, ones that build cultural and political bridges within and between countries, nation-states and neighborhoods.
For millions of soccer fans around the world, Africa, in effect, just won the World Cup! This is more than just wishful thinking. The make-up of the French team represents a powerful response against building walls and detention centers to detain and dehumanize immigrant populations.
The global debate over immigration is the human rights issue of our time. How are we to treat the women, men, children and families who risk their lives for opportunities that thrive in western society? The West’s long history of conquest makes this a particularly sensitive issue since many immigrants from Africa and other parts of the developing world are seeking to return to a nation that innovated their ancestral exploitation during slavery and its brutal aftermath.
We can no longer afford to pretend that immigrants entering any nation on earth are not fellow citizens seeking the opportunity to thrive and become citizens of a reimagined world community. France’s World Cup team demonstrates to all how immigration, at its best, holds the key to a liberated and more humane future for us all.
CNN
Share: