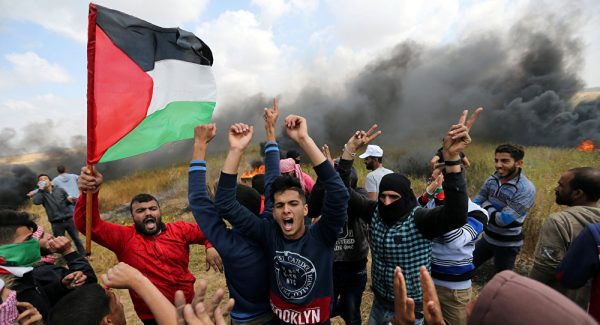 “The Great Return March” over Palestinian refugee rights to return to their homeland, Israeli forces are again shooting marchers in Gaza
Share:

The Israeli army said it would almost double the number of troops surrounding the Gaza Strip and in the occupied West Bank to tackle Palestinian protests against Monday’s controversial opening of a US embassy in Jerusalem.

Three additional infantry brigades will be deployed next week, two around the Gaza Strip and one in the West Bank, army spokesman Jonathan Conricus told reporters on Saturday.

The move nearly doubles the number of fighting units currently serving, he said, without giving specific figures on troops to be deployed.

The announcement does not concern Israeli-annexed east Jerusalem, where responding to protests is the responsibility of the police.

US President Donald Trump will not attend the opening of the new embassy in Jerusalem on Monday, but his daughter Ivanka and son-in-law and key adviser Jared Kushner will.

A signature campaign promise, Trump’s December announcement of the embassy move led to major protests in Gaza and the West Bank.

Palestinians consider the eastern part of the city as their capital.

Tens of thousands of Palestinians are expected to protest along the Gaza border Monday, with the strip’s Islamist rulers Hamas voicing support in recent days for attempts to breach the fence into Israel.

“What’s the problem with hundreds of thousands breaking through a fence that is not a border?” the organisation’s Gaza head Yahya Sinwar said, arguing Israel has never defined its borders.

Palestinians in Gaza have been protesting for seven weeks to be able to return to their historic homes they fled in 1948 and which later became part of Israel.

A 15-year-old teenager who was shot in the head Friday succumbed to his wounds on Saturday evening, the Hamas-run health ministry in Gaza said.

The death brought to 54 the number of Palestinians killed since clashes began on March 30, with hundreds of others injured.

No Israelis have been injured.

Israel has vowed to use the necessary force to prevent any breach on Monday and has accused Hamas of using the protests as a pretext to carry out attacks.

On Saturday Conricus said the rules of engagement had not been changed.

The United Nations and the European Union have called for an independent investigation into the deaths, but the Jewish state has rebuffed them.

The United States has defended its ally and accused Hamas of using Palestinians, including children, as human shields by encouraging them to protest along the border.

Israel and Hamas have fought three wars since 2008.

Separately Saturday Israeli aircraft carried out a number of strikes against what the army said was a Hamas attack tunnel near the Gaza border.