What to expect from Iraq’s election on Saturday 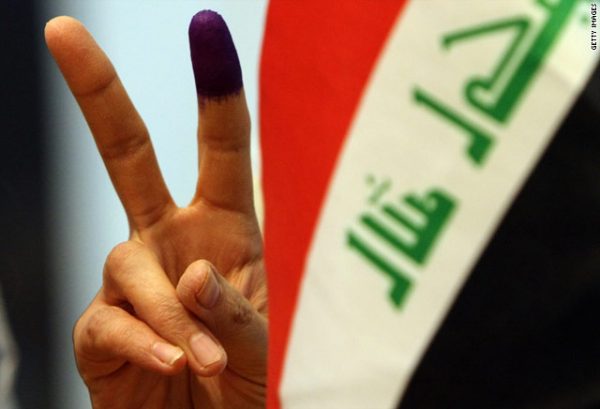 By Renad Mansour
Iraqis head to the polls on May 12 to vote for their next federal government. This will be the first time they vote since the territorial rise and fall of the Islamic State. It is also the first vote since a widespread protest movement started in 2015, calling for the removal of the current ruling elite and major reforms to the political system governing Iraq since 2003.

This vote, and the subsequent government-formation process, will determine Iraq’s political future. Despite a number of polls, it is impossible to tell who will become the next prime minister. Yet, pre-election maneuverings and strategies offer glimpses into the country’s political trajectory and the prospects of stabilization and rebuilding. Although many now celebrate the shift from identity– to issue-based politics in Iraq, this election reveals that change will not come as quickly as analysts might expect.

Fragmentation of the Shiite bloc

In the first post-war election (2005), the United Iraqi Alliance (al-Itilaf al-Watani al-Iraqi) represented all major Shiite parties and won a majority (56 percent) of the seats in parliament, under the “demography equals democracy” logic.

In subsequent elections — 2010 and 2014 — this list slowly fractured. Today, the main competition is between a number of Shiite parties. Similarly, the major Sunni and Kurdish parties — at one point united under single lists — are split into a number of competing parties.

This year, however, Shiite politicians are competing with each other in a different way.

To some extent in pre-election mobilization, candidates have signaled a move away from identity. Weeks before the election, Prime Minister Haider al-Abadi, head of the Victory Alliance (al-Nasr), organized rallies in Kurdish and Sunni areas — the first time the Shiite prime minister campaigned in Kurdish or Sunni areas. Similarly, Hadi al-Ameri’s Conquest Alliance (al-Fateh) — made up primarily of Shiite paramilitary groups from the Popular Mobilization Units (al-hashd al-shaabi) — has reached out across ethno-sectarian lines to its small number of Sunni, Christian, Yezidi and Shabak fighters. Even more extraordinary, Islamists associated with popular cleric Muqtada al-Sadr have joined forces with secularists with the Iraqi Communist Party to form the Revolutionaries for Reform Alliance (al-Sairoon). They demand reform to the ethno-sectarian quota system that has formed every post-2003 government in Iraq.

However, digging deeper into the electoral calculations and strategies employed by the major lists reveals more continuity than change. On the face of it, it is hard to find much difference between the campaign manifestos and speeches of the different coalitions. They all shun sectarian language, and make the same promise to fight corruption, to enhance public services, to provide employment and to improve the economy.

Although the rise of issue-based politics in society is more profound than in recent years, in terms of elections, it is not new. In 2010, former prime minister Nouri al-Maliki created a coalition called “State of Law” that promised to build and improve government services, to end the quota system and to fight corruption. His main opponent similarly argued that his coalition was open to all political forces. Echoing 2010, this year’s campaign sees Iraqis emerging from a brutal civil war against the Islamic State — and seeking change.

Beyond the change of tone, the Iraqi electorate is still predominantly defined by identity. To win votes, each leader focuses on tapping into preexisting identity-based networks. For the most part, Shiite leaders will win the Shiite vote, Kurdish leaders will win the Kurdish vote and Sunnis leaders will win the Sunni vote. Even the major cross ethno-sectarian lists competing in Sunni areas employ Sunni candidates to win the vote.

The challenge of change via elections

There is a bigger challenge that these elections pose. Focusing on the false dichotomy of identity versus issues diverts attention from the more significant gap — that between citizen and elite. In the name of inclusivity, post-2003 Iraq featured Shiite, Kurd and Sunni leaders. Fifteen years later, over 90 percent of the coalitions have been part of previous elections. Today, these same political coalitions and leaders compete for office but unrealistically promise systemic change.

In my meetings with Iraqis, many express fear that the elections will reinforce identity-based divides and provide a false sense of legitimacy to the same leadership. They now refer back to an important call from Grand Ayatollah Ali al-Sistani: “He who has tried should not try (al-mujarab la eujarab).” To them, this general ruling from Iraq’s most senior religious cleric was not a condemnation of certain wrongdoers, but a blanket call to replace the elite. Since 2015, protesters have demanded change to the political system in Iraq. Reshuffling the government with the same parties and leaders will not meet their demands. As a result, Iraqis throughout the country threaten to boycott the vote.

In Baghdad, many civil society activists and prominent personalities refuse to pursue a “get out to vote” campaign. They complain that the elite has co-opted their demands to create the facade of a system that is more representative and truly based on issues. To them, these elections reinforce the same system and the same elite. These elections also face further challenges: attacks on women candidates and the proliferation of fake news via social media jeopardize the fledgling democratization process.

Under the pretense of change, the vote risks real change.

Many say they hope that leaders emerge from these elections committed to gradual change and to rebuilding the state. While the jury is still out, Iraq’s recent history suggests that if real change emerges, it is unlikely to come from the electoral process itself.

Renad Mansour is a Research Fellow with the Middle East and North Africa Program at Chatham House and a Visiting Fellow at the Institute for Regional and International Studies at the American University of Iraq-Sulaimani.