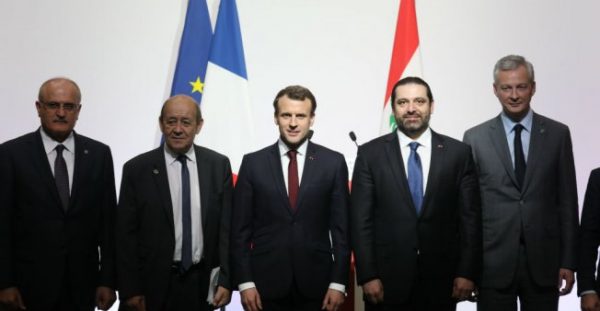 International donors convened in Paris on April 6 and pledged $10.2 billion in loans and $860 million in   grants to support the ailing Lebanese economy in exchange for reforms. Lebanon is currently the third most indebted country in the world, with a public debt estimated at 150 percent of GDP, or $79 billion. Lebanon currently ranks 143 out of 180 in the 2017 Corruption Perceptions Index released by Transparency International in February 2018, so if it does not reform its economy the pledges made at CEDRE might remain mere words.

Fears of economic collapse  mounted ahead of the Cedre  conference. Many worry that the Lebanese currency, which has been pegged at 1,500 to the dollar since 1997, could be devalued.  The state-owned electricity company is considered one of the biggest drains on the state budget, costing about $1.5 billion a year . Lebanon  was reportedly hoping  to secure  about $22 billions of dollars  at the Cedre conference , but the result is more debt  and very little help in grants.

Paris- France – International donors convened in Paris on April 6 and pledged $11 billion in loans and grants to support the ailing Lebanese economy in exchange for reforms.

Some 50 countries participated alongside organizations and private investors at the CEDRE conference – also referred to as Paris IV – with officials from the World Bank and the International Monetary Fund (IMF).

Lebanon garnered $11 billion in pledges, including $10.2 billion in loans and $860 million in grants.

The World Bank agreed to a $4 billion loan over the next five years for “inclusive growth and job creation in Lebanon”.

“We have been working in Lebanon for many years and we have delivered $3 billion of investments over the last five years. It has not always been easy, but the results are there for everybody to see,” said World Bank Chief Executive Officer Kristalina Georgieva in an interview with FRANCE 24.

“The reason we are confident is because the government over the last month has shown determination that we have not seen in past years. They have passed very important laws. They are pursuing procurement reform and they are putting forward an anti-corruption law with a strong backing from the people of Lebanon,” she said.

Following the meeting, French President Emmanuel Macron praised the international community’s “unprecedented mobilization” for Lebanon, describing it as crucial to creating the conditions for sustainable peace in the Middle East.

“[A]t a time when the Levant probably is living through one of the worst moments of its history … It’s more important than ever to preserve the most precious asset: a peaceful, diverse and harmonious Lebanon,” Macron said.

Initially, Lebanese officials had targeted a $6 billion mark to finance Phase I of the government’s Capital Investment Program (CIP) – the blueprint of the conference. The pledges exceeded expectations, but remain bound to results.

The Paris conference is expected to set up a follow-up mechanism to track progress toward reform, a vital tool to insure Lebanon does not fall short on its promises, as happened after the three previous Paris-based conferences.

The funds are to be used to implement the first of three cycles – every cycle is four years – of the ambitious $16 billion CIP.

The CIP, which is spread over the next 10 years, entails projects that aim to develop eight of Lebanon’s essential sectors: Transport, Water and Irrigation, Wastewater, Electricity (energy), Telecom, Solid waste, and Tourism & Industry.

According to Lebanese PM Hariri, economic growth in Lebanon has been curbed since the 2011’s Syrian Crisis, sinking to less than one percent from a previous average of eight percent.

Additionally, population growth by 25-30%, in addition to 1.2 million Syrian refugees, has put a huge strain on the existing, and weak, infrastructure.

A country worth support?

Saudi Arabia, which unconventionally saw its relationship with Lebanon strained in recent months due to competition for influence with arch-rival Iran, reinstated a $1 billion line of credit.

Iran, which backs Lebanon’s powerful anti-West Shiite militia, Hezbollah, was not invited to the meeting.

Hezbollah, which is part of the coalition government where it is represented by two ministers, has expressed concerns that the conference will add to the country’s massive debt. Lebanon is currently the third most indebted country in the world, with a public debt estimated at 150 percent of GDP, or $79 billion.

The latest IMF mission to Lebanon in February warned that “Lebanon’s debt is unsustainable” and that in the context of Lebanon’s low growth and rising global interest rates, “debt dynamics will deteriorate further and public debt will increase rapidly to just below 180 percent of GDP by 2023”.

The IMF added that Lebanon’s fiscal policy needed a consolidation plan to stabilise debt, then begin to reduce it.

In March 2018, Lebanon adopted its second budget since 2005. Saad Hariri has pledged fiscal consolidation to reduce the budget deficit – more than 150 percent of gross domestic product at the end of 2017 – by five percent during the next five years

The conference’s official goal was to mobilize financial assistance “to relieve debt and to create dynamism”, but was also a way for the West to prop up the anti-Hezbollah Lebanese political coalition, known as March 14.

The Lebanese government committed to an economic reform program, including an increase in the Value Added Tax (VAT) from 10 to 12 percent. However, the vertical political schism, unrest, and deadlock at government level led to the crippling of any efforts to implement it.

Lebanon currently ranks 143 out of 180 in the 2017 Corruption Perceptions Index released by Transparency International in February 2018.

This is clear indicator of the uphill battle the government will have to fight in order to deliver on its commitments and reform the economy.

Otherwise, the pledges made today at CEDRE might remain mere words.