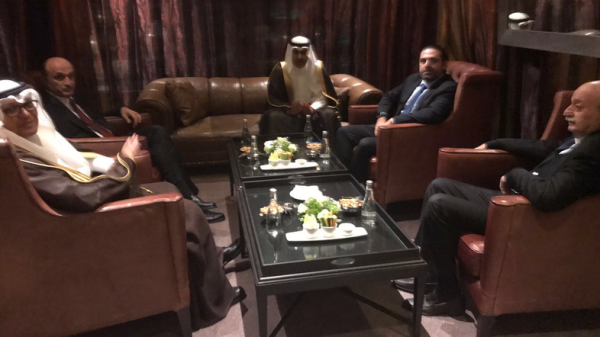 The meeting between the three leaders is the first of its kind in a long time.

A source commented that the meeting was the beginning of understandings between the three parties, stressing that the Saudi move aims to strengthen the Lebanese national leaders to achieve stability in Lebanon.

Al Alula confirmed to the Lebanese officials whom he met with last Monday in Beirut and Baabda that “Lebanon is at the heart of the Saudi leadership and its thoughts,” the newspaper Asharq al-Awsat reported.

Saudi Arabia has been trying to restore its   relationship  with its allies   in the wake of the crisis resulting from  Hariri’s resignation  last November, while he was in Saudi Arabia on an official visit  In addition  Saudi Arabia is trying to restore the relations between   Hariri and Jumblatt  resulting from a dispute over the removal of ” The Democratic Gathering  candidate “MP Antoine Saad from the the electoral  list of” Future Movement”   in the Western Bekaa-Rashaya district , which Jumblatt labeled  as an attempt to besiege him .

Hariri said: “Many Lebanese and many people in this capital know very well the special status of Beirut in the heart of King Salman bin Abdel Aziz. They know how much he loves Lebanon and its people.

”  All Beirut is here to honor King Salman ,  an important Arab figure who stood alongside Lebanon in the most difficult circumstances. It honors through it the Kingdom of Saudi Arabia, which in the history of the relationship with our country, has glorious pages of kindness, support and generosity, the big brother who translated the true meaning of fraternity by sponsoring the Taif agreement and ending the Lebanese tragedy, and helping Lebanon at all stages and in all crises.”