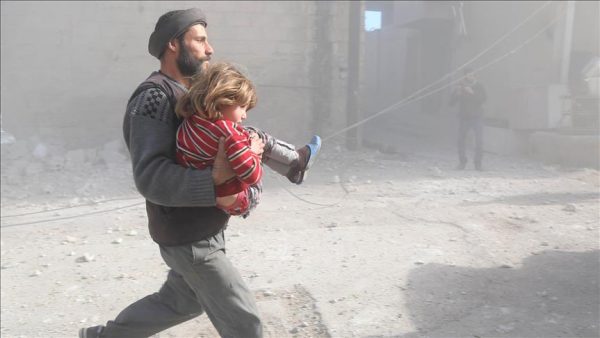 The United States on Sunday made its strongest accusation to date of Moscow’s complicity in civilian deaths in Syria, saying Russian aircraft flew bombing missions over the besieged eastern Ghouta region in defiance of a United Nations ceasefire.

The White House said Russian military aircraft took off from Humaymim Airfield in Syria and carried out at least 20 daily bombing missions in Damascus and eastern Ghouta between Feb. 24 and Feb. 28.

It did not say whether the jets dropped ordnance, which could be harder to determine than tracking the flight paths of Russian aircraft on U.S. radar. But the United States directly accused Russia of killing civilians.

“Russia has gone on to ignore (a U.N. ceasefire’s) terms and to kill innocent civilians under the false auspices of counter-terrorism operations,” the White House said in a statement.

Syrian President Bashar al-Assad vowed on Sunday to continue the offensive in eastern Ghouta, one of the deadliest in the war. A local insurgent group called it a“scorched earth” campaign.

With the war entering its eighth year, capturing eastern Ghouta would be a major victory for Assad, who has steadily regained control of rebel areas with Russian and Iranian support.

Government shelling and air strikes have killed 659 people in eastern Ghouta since Feb. 18, while rebel shelling of Damascus has killed 27, according to the Syrian Observatory for Human Rights.

“President Trump and President al-Sisi agreed to work together on ending the humanitarian crisis in Syria and achieving Arab unity and security in the region,” the White House statement said.

Russia and Damascus have accused rebels of preventing civilians from leaving eastern Ghouta during daily ceasefires. Rebels have consistently denied the accusation and say people will not leave because they fear the government.

The multi-sided war has killed hundreds of thousands of people since 2011.