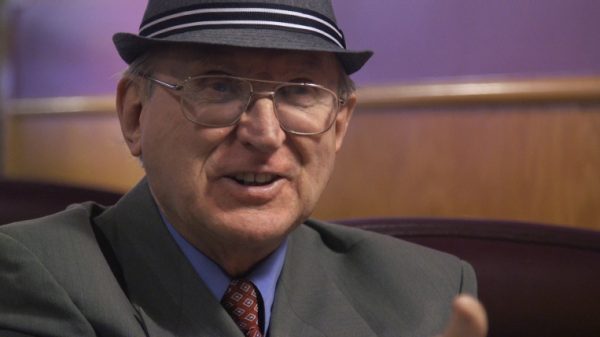 Arthur Jones is the only Republican candidate on the primary ballot for the 3rd Congressional District. | Marcus DiPaola/Sun-Times
Share:

Arthur Jones — an outspoken Holocaust denier, activist anti-Semite and white supremacist — is poised to become the Republican nominee for an Illinois congressional seat representing parts of Chicago and nearby suburbs.

“Well first of all, I’m running for Congress not the chancellor of Germany. All right. To me the Holocaust is what I said it is: It’s an international extortion racket,” Jones told the Chicago Sun-Times.

Indeed, Jones’ website for his latest congressional run includes a section titled “The ‘Holocaust Racket’” where he calls the genocide carried out by the German Nazi regime and collaborators in other nations “the biggest blackest lie in history.”

Jones, 70, a retired insurance agent who lives in suburban Lyons, has unsuccessfully run for elected offices in the Chicago area and Milwaukee since the 1970s.

He ran for Milwaukee mayor in 1976 and 13th Ward alderman on Chicago’s Southwest Side in 1987.

Since the 1990s to 2016, Jones has jumped in the GOP 3rd Congressional District primary seven times, never even close to becoming a viable contender.

The outcome will be different for Jones in the Illinois primary on March 20, 2018.

To Jones’ own amazement, he is the only one on the Republican ballot.

“And given the fact that I’ve got no opposition in the primary, OK, I win that one (the primary) by default all right,” Jones said during an interview in a coffee shop in Lyons.

That leaves Illinois Republicans saddled with a nominee who is well known for his racist and white supremacist activities.

Jones told the Sun-Times he is a former leader of the American Nazi Party and now heads a group called the America First Committee. “Membership in this organization is open to any white American citizen of European, non-Jewish descent,” he said.