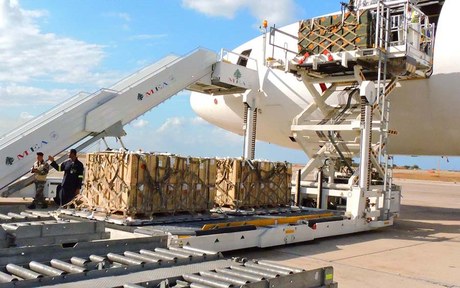 The Lebanese Army on Thursday received a shipment  of  arms and ammunition as part of the U.S. military assistance program, National News Agency reported

This development comes one  day after   the Lebanese Air Force (LAF)  received from the United States two A-29 Super Tucano aircraft.

Richard expressed in a speech her country’s commitment to continue supporting Lebanon’s armed forces to enable it protecting the sovereignty and integrity of its territories.

The ambassador stressed the LAF will be able to conduct joint combined arms maneuvers with A-29 aircraft in all conditions, day and night, in a way that greatly reduces the risk of collateraldamage and the danger to non-combatants.

She also highlighted the partnership between the two armies, noting over the last decade, the U.S. government has invested over 1.5 billion U.S. dollars in training and equipment, and has trained over 32,000 Lebanese troops.

Meanwhile, General Aoun described the relation between Lebanon and the United States as being in a new era of cooperation.

“It is a new era that holds a lot of significance and meanings: firstly, the will of the United States to continue providing qualitative support to the Lebanese Armed Forces; secondly, the trust of the armed forces in protecting Lebanon; thirdly, the commitment of the United States to preserve Lebanon’s stability during crisis and events in an unstable region,” he said.