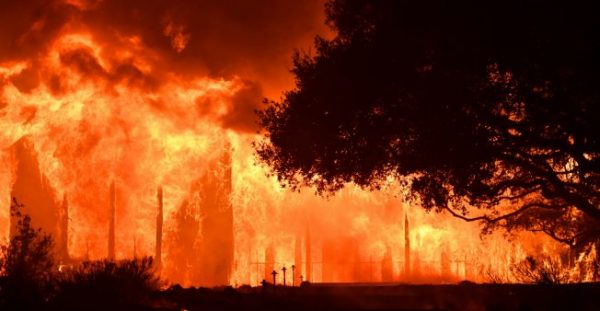 The wildfires tearing through California wine country flared anew Wednesday, growing in size and number as authorities issued new evacuation orders and announced that hundreds more homes and businesses had been lost.

The death toll climbed to 21 and was expected to rise higher still.

At least 3,500 homes and businesses have been destroyed since the fires started Sunday, making them the third deadliest and most destructive blazes in state history.

“We have had big fires in the past. This is one of the biggest, most serious, and it’s not over,” Gov. Jerry Brown said at a news conference, alongside the state’s top emergency officials, who said that 8,000 firefighters and other personnel were battling the blazes and more resources were pouring in from Oregon, Nevada, Washington and Arizona.

Nearly three days after the flames ignited, firefighters were still unable to gain control of the blazes. California Department of Forestry and Fire Protection spokesman Daniel Berlant said 22 wildfires were burning, up from 17 on Tuesday.
“Make no mistake, this is a serious, critical, catastrophic event,” said Ken Pimlott, chief of the department. He said the fires have burned through a staggering 265 square miles (686 square kilometers) of urban and rural areas. The return of high winds and low humidity ignited ground that was parched from years of drought.

“We are literally looking at explosive vegetation,” he said. “It is very dynamic. These fires are changing by the minute in many areas.”

As the fires grow, officials voiced concern that separate fires would merge into even larger infernos.

“These fires are literally just burning faster than firefighters can run in some situations,” Emergency Operations Director Mark Ghilarducci said.

Flames have raced across the wine-growing region and the scenic coastal area of Mendocino farther north, leaving little more than smoldering ashes and eye-stinging smoke in their wake. Whole neighborhoods are gone, with only brick chimneys and charred appliances to mark sites that were once family homes.

Fire map provided by CalFire. Current incidents information as well as a map can be found at https://t.co/HYQnqLWd7g#CAwx #northbayfires pic.twitter.com/Z4YuwAFbzF


Sonoma County Sheriff Robert Giordano said hundreds of people were still reported missing. But officials believe many of those people will be found because chaotic evacuations and poor communications over the past few days have made locating friends and family difficult.
The sheriff also expects the death toll to climb.

“The devastation is enormous,” he said. “We can’t even get into most areas.”

Officials in Napa County say almost half the population of Calistoga was ordered to evacuate before sunrise. Officials went through the town of 5,000 people block by block, knocking on doors to warn people to leave, Napa County Supervisor Diane Dillon said.

New evacuation orders were also in place for Green Valley in Solano County.

Meanwhile in Southern California, cooler weather and moist ocean air helped firefighters gain ground against a wildfire that has scorched more than a dozen square miles.

Orange County Fire Authority Capt. Steve Concialdi said the blaze was nearly halfway surrounded and full containment was expected by Saturday, but another round of gusty winds and low humidity levels could arrive late Thursday.