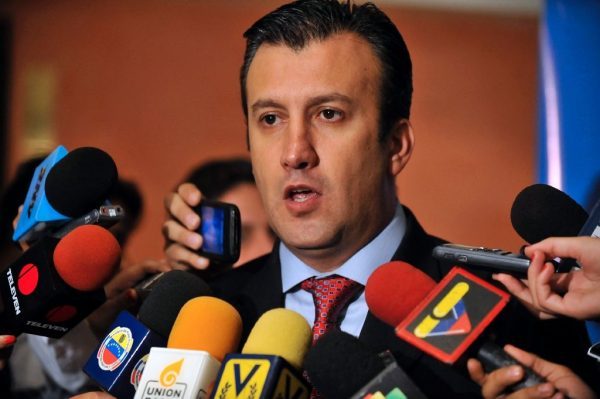 Venezuela President Nicolas Maduro named Tareck El Aissami of Lebanese, Syrian origin as his vice-president on January 4, 2016, making him the potential successor to the presidency in the event that the embattled Maduro is impeached (AFP Photo/LEO RAMIREZ)
Share:
The United States blacklisted Venezuela’s Vice President Tareck El Aissami for drug trafficking, the first crackdown by the Trump administration against a top official in President Nicolas Maduro’s government for money laundering and the drug trade.

The U.S. Department of Treasury said it designated El Aissami for sanctions under the Foreign Narcotics Kingpin Designation Act. His associate, Samark Jose Lopez Bello, was targeted for providing material assistance and financial support for El Aissami’s activities, Treasury said in a statement.

Treasury also targeted 13 companies owned or controlled by Lopez Bello or other parties that comprise an international network spanning the British Virgin Islands, Panama, Britain, the United States and Venezuela.

“El Aissami facilitated shipments of narcotics from Venezuela, to include control over planes that leave from a Venezuelan airbase, as well as control of drug routes through the ports of Venezuela,” a senior U.S. administration official told a conference call with reporters.

The Treasury Department said El Aissami oversaw or partially owned narcotics shipments of more than 1,000 kilograms from Venezuela on multiple occasions, including shipments to Mexico and the United States.

Another U.S. administration official estimated the value of property blocked in Miami was worth “tens of millions of dollars.”

Another official suggested the value of the property seized was not commensurate with the salary of a public official.

The Venezuelan government did not immediately respond to a request for comment. Maduro frequently accuses U.S. officials of trying to smear his administration.

U.S. officials denied that Monday’s designations had anything to do with El Aissami’s prominent political role. He is a former minister of interior and of justice.

As a result of these actions, Americans are generally prohibited from engaging in transactions or otherwise dealing with individuals and entities, and any assets they have under U.S. jurisdiction are frozen.

The move is a departure from the so-called “soft landing” approach taken by former president Barack Obama’s White House, which at times had clashed with efforts by the U.S. Justice Department and Drug Enforcement Agency, working with informants in Venezuela to nab influential government officials for money laundering and drug trafficking.

Since 2015, the Obama administration had sought to use behind-the-scenes diplomacy to ease acrimony with Caracas and the fallout of a string of U.S. drug indictments against Venezuelan officials, such as Nestor Reverol, the head of Venezuela’s National Guard.

Senior administration officials declined to say whether President Donald Trump had personally signed off on the sanctions or whether he was involved in the decision.

Typical drug trafficking designations would not normally rise to the level of the president for approval, but the blacklisting of a top government official of another country is far more sensitive than typical designations.

The sanctions are the first test of how the rocky relationship between the ideological foes evolves under Trump. The unpopular Venezuelan president has so far treaded carefully with Trump.

While he blasted the Republican as a “thief” and “bandit” during the U.S. election campaign, Maduro later cooled his rhetoric and said Trump deserved to be given a chance and in any case “won’t be worse than Obama”.

El Aissami, whom local media report is of Syrian and Lebanese extraction, grew up poor in the Andean state of Merida and went on to study law and criminology.

He has been both a lawmaker and a state governor for the ruling Socialist Party before being tapped vice-president last month.

Thirty-four Republican and Democratic members of the U.S. Senate and House of Representatives sent a letter to Trump on Feb. 8 urging him to act against Venezuelan officials.

Their letter referred to El Aissami, noting that his recent appointment as executive vice president put him in line to become Venezuela’s next leader.

That, they said, “is extremely troubling given his alleged ties to drug trafficking and terrorist organizations.”

In a joint statement Republican Representative Ileana Ros-Lehtinen and Senator Bob Menendez, a Democrat, called Monday’s move “long overdue” and praised the Trump administration for “acting quickly and decisively” against the Maduro government.

Republican Senator Marco Rubio said in a statement he hoped Monday’s designations were “only the beginning” of a move to pressure the Venezuelan government to stop illicit activities and free political prisoners amid its crackdown on the opposition.