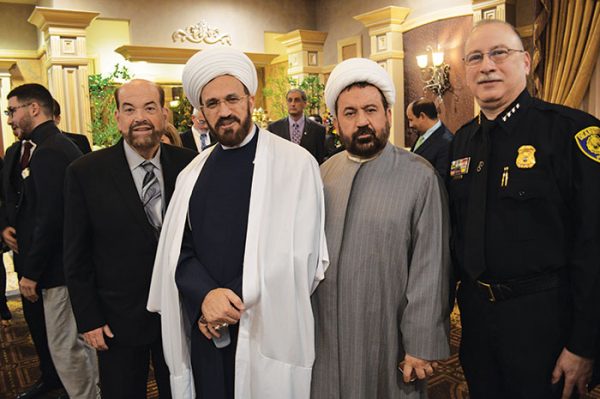 DEARBORN — “We are all for the homeland, for the glory of the flag,” trumpeted local Lebanese Americans – lest the diaspora remains divided.

In homage to the old country, hundreds, including recent immigrants and multiple generations of Americans, gathered with local officials, dignitaries and others to celebrate the 73rd anniversary of Lebanon’s independence on Tuesday at Byblos Banquet Hall.

As festivities kicked off with the national anthems of both lands, pride of their origins and dual identities were affirmed.

However, just as with most celebrations involving political undertones amid a heated election aftermath, some espoused a message of needed improvement.

Nadera Nassif, a local activist, opened the night honoring independence with a caveat.

“Only if we strive for excellence, we will achieve true independence,” she said.

She charged that if Lebanese Americans wish to reach new economic and political heights globally, they must rid themselves of sectarianism and allegiance to foreign agendas regarding their homeland.

Lebanese Consul General Bilal Kabalan assured the larger community of Lebanon’s path to prosperity and of an improved consulate to better serve the needs of expatriates.

Kabalan, who is based in Detroit, espoused that a brighter future is ahead for the country as Lebanese President Michel Aoun ran on the promise of fulfilling stability, resistance to occupation, uprooting terrorism and downsizing corruption.Among the Lebanese communities across Cleveland, Toledo and Chicago, among others – some of whom traveled to celebrate in Dearborn – the consul said he has established strong bonds. He also said the facility has doubled its staff to serve Lebanese Americans in 12 states.

“The winds of change are blowing,” Kabalan said, announcing his upcoming departure from his five-year post in Detroit.

But the consul had one last message to the Lebanese community.

“I urge you to embrace the American dream to the fullest,” he said. “It will help you overcome the constraints of the moment. Do not stop at every obstacle in your majestic struggle for a better community. Listen to the needs and make way for the youngest amongst you. Prove your love to your homeland and join us whrn you can.”

Dearborn Mayor Jack O’Reilly had a message for the incoming consul general.

He called for the new consul to be open minded, to first educate himself about the community’s subtleties and diversity.

As the mayor bid Kabalan farewell, he said he enjoyed celebrating the Lebanese Independence Day.

“This was great event,” O’Reilly said. “It is so important we celebrate when people have true independence, when they have a say on what happens in their own government.”

Dearborn Judge Sam Salamey, a Lebanese American, said the holiday is a recognition of Lebanon’s accomplishments and what it has offered the world.

He lauded expatriates, but expressed regret at the division and downfalls experienced in the homeland.

Regarding Donald Trump’s election, Salamey assured Arab Americans and immigrants that the president-elect will not be above the law to violate civil rights, although he might hold prejudices.

State Representative-elect Abdullah Hammoud (D-Dearborn) has not held back from divulging his Lebanese identity throughout his campaign.

Hammoud said he is proud of both his Lebanese and American heritages and said celebrating Independence Day applies to both homelands.

“This is a nation of immigrants,” he said. “All communities should know where they come from and never lose that sense of culture. That’s what makes America great.”