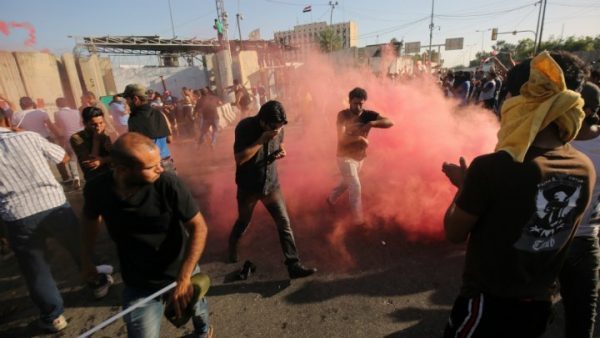 Security and medical officials also said at least 57 people were wounded in Friday’s unrest, in which forces used tear gas, water cannons and sound bombs against protesters, some of whom threw rocks and other debris.

Security forces also fired live rounds during the demonstration, mostly into the air, but officials said at least two protesters had died of bullet wounds.

Protesters faced tough resistance from security forces on Friday, before some demonstrators managed to force a gate into the Green Zone, where Iraq’s main government institutions are located, and stormed Prime Minister Haider al-Abadi’s office.

It was the second time in two weeks that protesters were able to breach the Green Zone.

Last month, demonstrators faced little resistance when they entered the Green Zone and stormed parliament. They withdrew from the area the following day.

Abadi reacted to the latest breach by saying that “storming state institutions… cannot be accepted,” but added that he supports the “demands of the peaceful protesters”.

Followers of Iraqi cleric Moqtada al-Sadr have been protesting for weeks demanding reforms and a new government, and had warned they would again break into the Green Zone if progress was not made.

Sadr vowed Friday that “peaceful protests” would continue, warning that “the revolution will take another form” if there are attempts to block them.